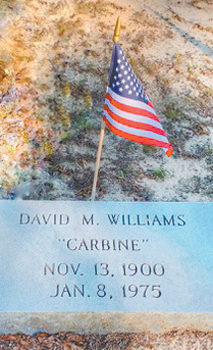 History is often a traveler's best companion. I read a book titled "Here Is Where: Discovering America's Great Forgotten History" by Andrew Carroll. In the book, Carroll tells the story of Dr. Joseph Goldberger, who used prisoners in Mississippi as a control group to find a cure for pellagra. Pellagra is a disease caused by low levels of niacin, also known as vitamin B-3. It can be fatal.

In the chapter titled "Sparks: Inventions and Technological Advancements," Carroll opens with the story of Calendonia Correctional Institution. David M. Williams of Godwin, North Carolina, is the focus in this part of the story. Williams was accused of killing Cumberland County Deputy Al Pate on July 22, 1921, during a raid on a moonshine still. The evidence was mostly circumstantial, but Williams pleaded insanity. At the trial, one juror was convinced he was insane, resulting in a mistrial. At retrial, Williams pleaded guilty to a lesser charge in fear of a life sentence or the electric chair.

In 1921, while in prison, Williams eventually was able to work in the metal shop. Williams was talented with firearms, and he began working on a design for a new gun. With the help, trust and encouragement of the prison's superintendent, Captain H. T. People, Williams invented what became the most influential weapon invention in history, the short-stroke piston. The design allowed the breach of a semi-automatic weapon to travel less distance and provide a faster reload capability. This invention led to the production of a shorter, lighter and more dependable rifle, the M1 carbine.

In 1941, Winchester won a contract with the military to build the M1 carbine. In Carroll's book, he reports that 8 million M1s were produced for Word War II and the Korean War. It was reported that Gen. MacArthur stated the M1 carbine was "one of the strongest contributing factors in our victory in the Pacific."

I did some further research and discovered that in 1952, Jimmy Stewart starred in a movie called "Carbine Williams." I downloaded it from iTunes and enjoyed watching it. During my research, I learned there is a historical marker in Godwin, and that Williams is buried not far from there, at the Old Bluff Presbyterian Church near Wade, North Carolina.

Times are changing, and so are our ways of finding new spots and recommendations. Lately, I've been turning to social media. On Facebook, you can type in the place you want to go and ask for a recommendation. Usually, some nice person will help you out.

Recently, I've been trying to get my head around Instagram and have discovered a few things. If I type in some place I want to go, I can search for pictures and see places that people have tagged. Once I see something I like, I just message the person that posted the picture to ask them more information about the picture or where it was taken. Most of the time, people will be kind enough — maybe even excited — to help because you enjoyed their work.

Traveling and learning are just great companions, and you do not have to go across the country to find a little history.

Oh, and about Williams. I will leave you this thought. Although Williams certainly took his time in prison, he turned an evil act into a historychanging moment. What about People? If People had not recognized Williams' genius and not given him the latitude to work in that metal shop, how would World War II and the Korea Wars have turned out? Due to the superior firepower that the M1 carbine gave the U.S., I would suspect our casualty rates at the least would have been much higher, and history would be different.

It is reported that by the time Williams died at the age of 74, he had between 40 to 60 patents.