Behind the glamour shot is the real Meg Larson 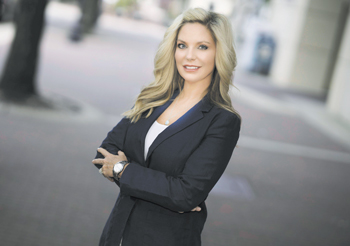 If you’re wondering why, here is the explanation she gave on the private Facebook page Hope Mills Chatter. I’m not a member of the Chatter, but I have friends in that group who shared screenshots of Larson’s announcement.

Here’s what she wrote: “I am not running. I appreciate everyone that has supported me. However, the thought of possibly sitting another two years with Jackie Warner or Pat Edwards makes my stomach turn. Two of the most ineffective elected officials.

“Working with someone vs. seeing them as they give a cheesy speech at a government event, the Chamber or church does not mean they are good for the community.’’

That is the real Meg Larson. No punches pulled there.

Larson has repeatedly accused Warner of being a bully, of forcing her agenda on the town and leaving the commissioners in the dark about what’s going on. I guess Larson dumped Edwards in the mix because Edwards has consistently defended Warner, not because Edwards is a poor commissioner, which she isn’t.

Go back and take a look at town minutes and see how many times this current board voted 4-1, with Edwards usually being the one, to defeat some plan or idea that the mayor supported. And let us remember, the mayor doesn’t get a vote on this board. And she’s the bully? How ridiculous.

I think one reason Larson and others accuse the mayor of being a bully is because of the way Warner runs town commissioner meetings. Excuse me, folks, but ever hear of parliamentary procedure? A guy named Robert wrote a book about it a long time ago. You can grab a copy on Amazon for $6.99.

The town also has rules of order, adopted by this board, and when Warner has to gavel a commissioner down, it’s usually because they are trying to speak out of turn against the rules. This isn’t Saturday night poker with the boys. It’s an elected governing body with procedures and protocol.

But let’s get back to the bullying issue. It’s a skill Larson has mastered. I know because she bullied me.

In March of this year, I wrote an Up & Coming Weekly story about the town losing artwork donated by students at the University of North Carolina at Pembroke because the commissioners didn’t renew the agreement they had approved the previous year. The whole thing could have been handled with a couple of phone calls to me and my publisher, Bill Bowman. But Larson and company called a special meeting of the board to deal with this red-hot issue.

What made the issue red-hot was they had egg on their faces for not doing their jobs, and they needed someone to blame. Even Warner herself said in my story that “we,” meaning herself and the full board, dropped the ball on the art project. She repeated that comment at the March 25 special meeting.

But pass-the-buck Larson and friends attacked Warner, who was legitimately afraid to bring renewal of the art project to the board because of the clear history they had established of voting against anything she supported. Further, the board blasted me. Larson accused me of manufacturing a quote from UNC-Pembroke professor Adam Walls. Walls told me in a phone interview about Warner’s fear of the board rejecting the art project.

Walls later spoke to both Larson and town manager Melissa Adams, and at the special meeting, both said that Walls stated he did not recall making that comment. I attempted to reach Walls after the controversy exploded, but he did not return my phone call.

“For anyone to assume that and put it in print is irresponsible,’’ Larson said during the meeting. It certainly would have been.

There is a difference between not remembering something and denying you said it, and what Walls said and what Adams and Larson repeated was not a denial. It was a memory lapse. Walls made that statement I attributed to him during our interview, whether he recalls it or not.

Larson and others on the board chastised me for that “deplorable” article. They ripped me for not talking with any of them and added that the article contained multiple errors. You can hear the whole thing. The audio recording is on the town of Hope Mills website under minutes and agenda for March 25.

My publisher, Bill Bowman, attended that meeting. The board had the opportunity to ask him to comment and didn’t.

Interviewing people is a two-way street. First, they have to agree to talk. I have tried to contact several members of the board for stories before. Larson, in an email I still have in my inbox, told me she would not speak to me because she did not approve of the relationship that the town had approved, and eventually rescinded, with Up & Coming Weekly. By the way, UCW is a legitimate North Carolina Press Associated weekly community newspaper — often referred to as news media.

Others, including Mitchell and Jessie Bellflowers, replied to previous requests and said they were too busy to speak with me. I have their replies, too. To his credit, Bellflowers reached out to me at the time of the missing art story, and I have quoted him in stories since. Our conversations have been civil and professional. So have interviews I’ve had with citizens and town staff from Hope Mills in the months since I’ve been writing about the town. Larson remains the only person in that time who has questioned the accuracy of my quotes.

Not a single member of the board who complained about that story in that special meeting, save Bellflowers, spoke to me about it. And not one person on the board who complained about factual errors or misinformation in the story asked to write a rebuttal or asked me to print a correction or retraction. In addition, UCW’s longstanding policy is to allow anyone to submit a dissenting opinion, feature or article focusing on the community. The only requirement is that they own it. This is why each article and feature appearing in UCW is accompanied by a photo and short bio of the writer.

This whole business with Larson and the feud the board has with Warner is about ego and who gets to call the shots. It’s not uncommon in politics, especially for rookie newcomers, who often have trouble figuring out how one builds a base of support and wins the respect of his or her fellow elected while learning how the process of governing works.

Before I wrote this piece, I spoke with an acquaintance who is an elected official somewhere else in North Carolina. I explained the situation in Hope Mills to him, and he gave me some sage advice.  He said it’s incumbent on people elected to office to do the best they can to work with the people they’re in office with and bury any personal animosity.

Judging from her Facebook statement, it’s clear Larson is not capable of that. This being the case, I have a suggestion for her. Resign. Now. If she can’t stomach two more years with Warner and Edwards, she shouldn’t suffer a few more months. She should do it for her health. But mostly for the town’s health. She can then devote the bulk of her energy to slinging more unfounded mud in support of Mitchell’s campaign to unseat the mayor she hates so much.

Maybe with Larson off the board, the remaining members can find the way to unity and a better Hope Mills. We can only hope so.