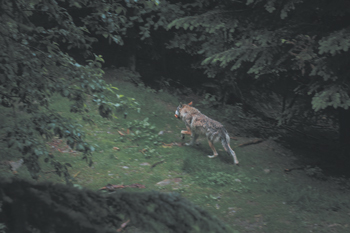 Right now you are probably asking yourself, “What are Dog Men, and how should I feel about them?”

As a public service, today’s column is going to give you something new and exotic to worry about - Dog Men. America in the first quarter of the 21st century has a short attention span. We keep running out of things to concern us in the middle of the night. Trade wars, mass shootings, Mueller reports and bizarre weather events all fade into oblivion as the next fresh horror appears in the collective consciousness.

Dear Leader himself has warned that the Chinese are not going to capitulate to his tariff trade war because they are waiting to see if a Democrat is elected to replace him in 2020. The Democrats are warning that the Russians will again be supporting Dear Leader’s re-election in 2020. This leaves America in the interesting position of the Chinese trying to manipulate our election to support the Democratic nominee and the Russians trying to manipulate our election to support Dear Leader. What could go wrong under these circumstances? Both the Chinese and the Russians want what is best for America. Pick your poison: A Chicom- or a Russkie-supported U.S. President. But even this colorful situation divides the country into tribes.

What America needs in addition to a good five-cent cigar is a single issue to worry about that will unite us as one nation again. We need a boogie man who unites both the Left and the Right into a single fearful mass concerned about our collective self-preservation instead of dividing us up into political Shiites versus Sunnis. Fortunately, we have such an issue that will bring America together again: the rise of the Dog Men. The late great singer Warren Zevon once sang, “I’ll sleep when I’m dead.” Warren is now sleeping, but his words linger on to guide us into yet another sleepless night. If you feel sleep is a waste of time that you should be devoting to worrying when the sun goes down, this column is for you. Lurking on the far edges of the internet and late-night a.m. radio are Dog Men. You may never have heard of Dog Men, but today you shall. Anxiety about Dog Men can fill in the vacuum in your bucket of worries to help keep you awake at night.

Let us begin with a primer on Dog Men. Unsurprisingly, Dog Men are an unholy cross between dogs and men. A website devoted to Dog Men defines them as “cryptozoological beings that are large and look like upright canids.” I had to look up the meaning of the word “canid” because initially, I thought a canid was a candied sweet potato that could stand on two legs. I visualized a giant sweet potato — covered in marshmallows — stalking through the forests of North America looking for a roasted turkey to consume. It turns out a canid is not a sentient ambulatory sweet potato. According to the Google machine, a canid is a member of the species that includes dogs, wolves, foxes, jackals and dingoes. With the mention of dingoes as members of the canid species, I was sorely tempted to take a cheap shot at the dietary habits of dingoes. Displaying incredible self-restraint, I will resist the opportunity to quote Meryl Streep and Elaine Benes, who both famously said, “The Dingo ate my baby.” If a dingo could eat your baby, imagine what a Dog Man could do to a grown man.

There are two types of Dog Men: the K-9 type, which looks like “Sasquatch with a muzzle,” who have canine-type legs without knees and very large heads and Type-2 Dog Men, who  have human-type legs with knees and ankles, featuring claws on their fingers and toes. Dog Men tend to live in the deep forests with only occasional sightings by humans. However, some urban Dog Men have been sighted in Washington, D.C., making laws in Congress. Dog Men occasionally attack people, but most encounters with Dog Men result in the observer getting away without being mangled.

Contrary to popular belief, Dog Men are not nocturnal. They have been seen at both day and night. There are numerous websites devoted to Dog Men on the internet if you need an additional source of worry.

So what have we learned today? Sadly, once again, almost nothing of use. It is sad to think that a tree had to die to allow this stain on world literature to be printed.

To prevent this column from being a total waste of your time, allow me to leave you with a couple of quotes. Groucho Marx said, “Outside of a dog, a book is man’s best friend. Inside of a dog, it’s too dark to read.”

Mark Twain advised: “If you pick up a starving dog and make him prosperous, he will not bite you. This is the principal difference between a dog and a man.”

If these quotes apply to Dog Men, you can decide if sleeping is still an option.

Dog Men are an unholy cross between dogs and men