When the selfish quest for power alienates reason 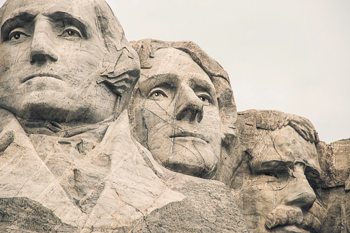 The quest for power is probably acceptable where the aim is to better conditions for people or in some situation where correction is needed. However, when having power becomes the end in itself, reason gets thrown to the wind. Those seeking power focus so totally on gaining it that any capacity for applying reason or productive thought is alienated or put out of sight. The responses of many politicians, most media and some citizens, to the recent mass shootings in El Paso, Texas, and Dayton, Ohio, point to the truth in that statement.

As I start writing this column on Aug. 6, 22 innocent people have recently died as a result of the El Paso shooting and nine in Dayton. Many others were injured in these incidents. The responses by politicians, most media and a substantial portion of the American citizenry were predictable. There has been a rushed return to calls for gun control, addressing racism and eliminating white supremacy.

We have done this dance time and again across more years than I care to remember. The one new twist is that Democrats and their cohorts now look for ways to blame every mass shooting on President Donald Trump.

I am sitting at my desk writing while listening to Joe Biden, former vice president and now a candidate for president, speaking in his role as a candidate. He went on for several minutes excoriating Trump, while in my estimation, saying nothing about how we might successfully address the plague of mass shootings. There is reporting that he has proposed an assault weapons buy-back program. Biden is not alone in this unproductive response to the scourge of mass shootings in America. Even more disturbing is that nobody in the political class, or sadly, hardly anybody else in this country, has the guts to seriously address the multitude of devastating problems that plague us as a nation.

There is a major component of our inability to solve the seemingly overwhelming problems that challenge the continued existence of our nation. We have become a nation almost devoid of connection to God. Like it or not, despite their failings and shortcomings, the founders of this nation were people of faith and started a country based on the principles of scripture and the values and the beliefs consistent with the example of Jesus and the call of God. America has just about completed the 180-degree turn from being guided in our actions by those God-given principles.

In my estimation, the destructive results of this turning show up in two primary ways. The first is that a person who is angry, filled with hate, or even mentally deranged, has no positive set of values or beliefs that constrain evil, sinful behavior. Consequently, people like these most recent shooters, whatever their unhealthy state of mind, do their choosing in a belief framework that determines a mass shooting to be acceptable.

The second result is that when we seek to address destructive events such as a mass shooting, it is done absent of any self-examination in light of God’s principles for individual and societal living. That is, no attention is given to where we have strayed from the ways of God and how that straying might contribute to our current dreadful state of being. Further, apart from a few people praying in the safety of their homes and churches, there is no seeking of God’s direction as we deal with the crushing conditions that we face.

I contend that if we were looking to God, we would recognize how far, as a nation, we have turned from God and his principles. We have become a nation where almost any behavior is accepted. In such a circumstance, nobody should be surprised that some would conclude that mass shootings are justified and acceptable. That is what is possible in a society that so completely turns from God.

Lacking any honest self-assessment and seeking of God’s direction, we get exactly what we are getting; politicians and others responding in ways that serve their self-interest. It s the same old solutions, with the addition of the “blame Trump” piece. It would take real guts to employ an approach that might get to the heart of the matter and produce real solutions. The obstacle is, if you get to real solutions, the mass shootings issue will go away for the 2020 presidential election. The same is the case with border security, infrastructure, reducing national deficits and debt, and so on. Democrats do not want to fix any of these issues because it would give Trump a win.

If you doubt the truth of that preceding paragraph, consider this: Democrats and their supporters have been screaming that Trump should work to unify the country. Among other actions, they said he should call out white supremacists, promote racial healing and decry hatred. In a speech this week, he did all of that. After the speech, The New York Times ran an article headlined, “Trump Urges Unity vs. Racism.” An article by Mike Brest titled, “New York Times changes headline on Trump shooting response after presidential candidates slam them” reported as follows: “Following the outcry of condemnation, The Times then changed the headline to ‘Assailing Hate but Not Guns.’ The photo that went along with the story was also changed. The new photo is captioned, “A vigil at Horizon High School in El Paso for Javier Amir Rodriguez, a 15-year-old student who was fatally shot at a local Walmart.”

The Brest article includes statements from Democratic presidential candidates Beto O’Rourke, Cory Booker, Kirsten Gillibrand and Bill de Blasio. They were joined by some media persons and general public members in complaining about the headline. The problem is that they do not want the president to pursue unity. His doing so would adversely impact their 2020 strategy of portraying Trump as a destructive force in America.

The point here is that we are inhabitants of a nation that was built on Judeo-Christian principles. The nation has deserted those principles. Looking to God for direction is under successful attack. In this atmosphere, people seek, by any means necessary, to gain and hold power. Because this quest for power is selfish, reason is alienated, nearly non-existent.

This alienation of reason shows through in how mass shootings are addressed. Consider the El Paso shooting. I have not been able to get access to the manifesto written by the shooter. Here is what Christina Maxouris writes in an article titled, “The El Paso shooting suspect wrote a ‘manifesto,’ police say. It was filled with anti-immigrant and racist language.”

“The writing is filled with white supremacist language and racist hatred aimed at immigrants and Latinos, and the author says he opposes ‘race mixing’ and encourages immigrants to return to their home countries.

“Some of the language of the manifesto reflects ideas from President Trump, Fox News and the modern Republican party. For example, the document warns of a ‘Hispanic invasion’ and says Democrats are using ‘open borders’ and ‘free healthcare for illegals’ to attract new voters.

“The writer cites a fear that an influential Hispanic population in Texas would make the state a ‘Democratic stronghold.’ But he says ‘the Republican Party is also terrible’ because the GOP is, in his mind, pro-corporation, which could lead to more immigration.

In this “selfish quest for power” atmosphere, the points in that summary that resonate with millions of law-abiding Americans are disregarded, and this mass murderer is labeled racist, white supremacist and hate-filled. His chosen response to all that he viewed as unacceptable in America was horrible, and he should not have done what he did. However, reason calls us to honestly examine why this man did what he did. That includes growing up in a nation that has: nearly completed total desertion of God; implemented a moral code where almost any conduct is acceptable; moved to limit, and even threaten, the speech of those who challenge liberal orthodoxy; substantially started toward, where politically advantageous, disregarding the law in allowing people to illegally enter America and live here unimpeded while receiving health care, financial assistance and so forth.

Reason says stopping unacceptable behavior requires being honest about why it happens. Our problem is that in a nation almost devoid of connection to God, the selfish quest for power is alienating reason.

The founders of this nation were people of faith and started a country based on the principles of scripture and the values and the beliefs consistent with the example of Jesus and the call of God.