World’s funniest Wilmingtonian, syndicated columnist Celia Rivenbark, recently published a column on — of all things — thank you notes. She is all for them. Celia says, “Point is, this is still the South the last time I looked and if you receive a gift, you need to say thank you with some pretty stationery and a stamp that has flowers on it.”

The gold standard of thank you notes is exactly what Celia says — nice stationery or note cards, with an engraved monogram if you are really fancy and schooled into traditional propriety. Notes should be handwritten with lovely and highly legible penmanship unless the writer is manually disabled and should touch all bases — how kind of the giver to remember the occasion and how much you appreciate the thought and look forward to using the special gift. Those are the basics, and beyond that formula, a creative thank you note writer will wax on eloquently, drawing connections among kith and kin, describing the gift as nothing short of the Mona Lisa itself, and the bond between giver and recipient is eternally forged.

Having written and received a zillion thank you notes myself, I do know that things have changed over time. I still have monogrammed — though not engraved — note cards, and use them for thank you notes, condolences and sometimes just howdy dos. Times have changed with technology, though, and I am not above a thank you email or even a text, especially to a younger person who might find a handwritten note card arriving by snail mail akin to a missive from Mars. 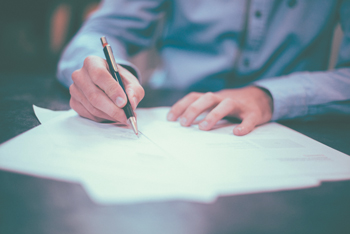 But there are definite limits to what passes as an acceptable thank you, and I have had a few of those myself.

Most notably was a preprinted fill-in-the blank card that read something like this. The filler-in-the-blanks was a recent bride. The card arrived in a computer-addressed envelope with meter bulk mail postage, no doubt from the meter in her parents’ office.

Thank you for the lovely____________. Aloysius and I will enjoy using it/them for many years and will think of you every time. We are grateful for your thinking of us at this special time in our lives.

This thank you note was wrong in oh-so-many ways. I can only imagine Anastasia filling out cards as she watched “Orange is the New Black,” so no wonder she lost track of what she was doing.

She thanked me for lovely napkins, when we had given the happy couple embroidered pillowcases. And Anastasia did not love me for a single second, as I am a friend of her mother’s and have not laid eyes on her since she was a baby. There was nothing personal or sincere about this assembly line thank you. The bride was merely checking the boxes of what she thought she should do, perhaps even knocking them all out during one great binge-watching session.

Times have certainly changed, and all of us are busy, busy, busy but not so much that a canned thank you note or group email or text mentioning only a “lovely gift” pass for genuine gratitude. The point here is not that the giver receives an acknowledgment of effort made and money spent but that the recipient expresses sincere gratitude that someone, even an old lady, long ago friend of her mother’s wished her and her husband well as they began their lives together.

Contrast Anastasia’s note with one I received from a young cousin to whom we gave a toy on an early birthday. The boy, about six or seven, wrote a note on lined paper with what could only have been a # 2 pencil. It read, “Thank you for the truck. It made me happy.” I know his mother made him sit down and write, but his note was simple and sincere, and those qualities will stand him in good stead all his life.

Celia put it this way, “It’s not about being thanked. It is about thanking. It’s about being grateful enough to spend a few minutes to reflect on someone’s generosity. That’s never a bad thing.”