The secret to eternal youth 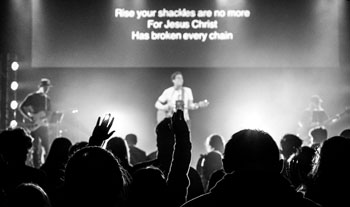 The secret to eternal youth is a lot simpler than we make it. It's not found in some rejuvenating elixir or dietary plan. The only remedy to growing old is to simply stop waking up. Because the fact of the matter is that every time we wake, we are certain to have aged — at least a little.

As I crossed the threshold of a landmark birthday this summer, I found myself surprised at how quickly it actually got here. When I was a young man, I thought by this time in my life I'd be creaking around, sitting in a rocker on the porch randomly yelling at neighborhood kids to get off my lawn. But no. Growing old and aging aren't necessarily the same.
On a recent weekend, I put in some earbuds and headed out to mow the lawn and selected a playlist that caused me to be excited not only for my age, but also for the generations coming behind me. Warning: the rest of this will probably seem decidedly Christian to some, but what do you expect? I run a Christian radio station, which is more an extension of who I am than it is has ever been a job.
The playlist I selected was called, “Praise and Worship Hotlist.” It treated me to dozens of songs ranging from energetic pop to reflective anthems  — all with a focus on inciting a deeper relationship with God in the listener. The experience led me to recall the cliché phrases we hear from those aging around us like, “They call that music?” But that's not how I felt. Instead, I thought it was beautiful to hear such lyrical and poetic thoughts wrapped in musical packages that completely reflected a generation I can only observe from the outside.
The young songwriters and musicians spoke to the realities of their world. And while we hear many people complain about the same things, they offered them to God, and declared he was the one who would strengthen them to endure and eventually change them. All the more poignant, most of the songs were recorded live, and you could hear the echoes of a great crowd around them.
We often hear about the number of young people walking away from the church. We're told they hold nothing about their parents' faith dear. They even call them the “nones.” No preference. No faith. Nothing. What we hear less about is the burgeoning faith and devotion of the same generation who didn't leave. Or the ones whose faith came fully alive as they entered adulthood.  For the former — the nones — perhaps they didn't walk away at all. More likely they only went
through the motions of faith because that's where their parents took them or where  their limited social circle centered.
Genuine Christian faith is not something you walk into and out of. It becomes more an extension of who you are than a place you go or a thing you do. And to those demonstrating that faith: I like your music. Walk on my lawn any time.
How to resolve AdBlock issue?
X