Vaping for fun and profit 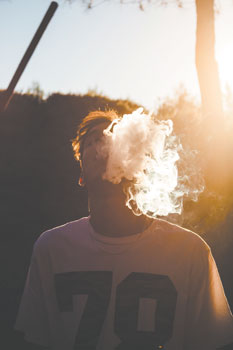 Look down, look down that loathsome road and decide today’s question: Are e-cigarette companies worse than heroin pushers? At least with heroin, the first shot is free. Ponder this issue for a moment to divert you from deciding whether having to buy the ACC network from cable vision is a rip-off or merely an abomination. First, a brief tour through the candy-flavored mists of vaping history. In 2006, a Chinese company brought out an e-cigarette called the Ruyan V8. It was billed as a way to help people stop smoking tobacco. The Ruyan V8 sounds like either a vegetable health drink or a snazzy sports car that James Bond might have driven.

Gentle reader, perhaps you are curious about what vaping involves. The Ruyan began with simple tobacco flavored e-juice. This tobacco juice proved. E-cigs soon begat a variety of flavored e-juices. There are some pretty funky ingredients in e-juice.

Consider the components. E-juice contains sweet-tasting glycerol, which is also used in explosives and antifreeze. It has propylene glycol to create the beautiful and sophisticated clouds of vapor. Oils both natural and unnatural flavor the e-juice. Nicotine rounds out these taste treats. Nicotine provides the bracing addicting element that keeps vapers coming back for more. Fun fact: One e-juice pod is about the equivalent of a pack of cigarettes. The final ingredient is benzoic acid, a food preservative that has the added benefit of increasing the potency of the nicotine.

The ingredients in e-juice could have come from Shakespeare’s play Macbeth. Recall the witches hanging around the stew pot mixing up their own e-juice chanting: “Double, double toil and trouble/Fire burn and caldron bubble/Fillet of a fenny snake/In the caldron boil and bake/ Eye of newt, and toe of frog/Wool of bat, and tongue of dog/Adder’s fork, and blind-worm’s sting/Lizard’s leg, and owlet’s wing/For a charm of powerful trouble/Like a hell-broth boil and bubble/Double, double toil and trouble/Fire burn and caldron bubble.” I would take my chances with the witches’ brew before an e-pod.

Smokers put e-juice into the internal combustion engine of the vaporizer to impregnate their lungs with the deeply satisfying molecules of nicotine and the other delicious chemicals. This process of inhaling witch’s brew of e-juice by the addicted vaper is reminiscent of the scene in “Silence of the Lambs” where Buffalo Bill tells the captive lady in the pit: “It puts the lotion on its skin, or else it gets the hose again.” The vaper puts the e-juice in his lungs, or else he gets the nicotine shakes again.

Vaping is big business. “The Wall Street Journal” reports $7 billion of vaping went on in 2018 by 8 million adults and 5 million children. Unsurprisingly Big Tobacco is all over e-cigarettes. The Altria Group, which used to be named Phillip Morris, owns 35% of Juul — the leading seller of e-cigarettes. Juul runs full-page ads in “The Wall Street Journal,” saying it doesn’t want children to buy its product. Similarly, I, as a UNC fan, don’t want North Carolina State to get rid of a bad basketball coach, either.

Debate remains about whether the various e-cigarette companies are sincere about not selling their product to children. If you go on an e-cigarette website, you have to click on a box that says you are over 21 to buy e-cigarettes there. It’s the honor system. Clicking on the box is as effective as the old stickers on cigarette machines that said minors could not buy cigarettes from the machine. Consider the names of some flavored e-juices that various vaping companies used to entice underage buyers to purchase their products. I am not making these flavors up: Cool Mint, Mango, Crème Brûlée, Cool Cucumber, Fruit Medley, Chocolate, I Love Donuts- Blueberry, I Love Cookies, Vanilla Custard, Cinnablaze, Corn Flake Tart, Blueberry Jam, Baby Clouds, Blueberry Cobbler, Peanut Butter Cup, and Custard’s Last Stand. There are hordes of manly men out there wanting to smoke Baby Clouds e-cigarettes.

Here actual ad copy on an e-cigarette web site that doesn’t appear to be aimed at adults. To wit: “Many smokers who switch to vaping start out with tobacco flavors and move on to find delight in these sugary e-liquids, which are also available in seven or more nicotine levels. Many of these e-cig dessert flavors are available in our high-VG Ultimo Vapor E-Juice, including Napoleon’s Fave. When you vape it, it feels like you’re devouring a cone topped with a triple-scoop of vanilla, strawberry and chocolate ice cream that never melts! Vapers and former smokers can also find e-cig indulgence in our prefilled e-cig cartridges, where these dessert e-juices are among 150 flavors that come loaded up and ready to deliver you pure vaping pleasure.”

As Macbeth’s witches said: “Scale of dragon; tooth of wolf/ Witches’ mummy; maw and gulf/ Of the ravin’d salt-sea shark; Root of hemlock digg’d in the dark; Sliver’d in the moon’s eclipse/ Nose of Turk and Tartar’s lips/ Make the gruel thick and slab;/ Add thereto a tiger’s chaudron/ For the ingredients of our cauldron/ Cool it with a baboon’s blood/ Then the charm is fine and good.”

Take a puff; it’s summertime. Enjoy the pure vaping pleasure of the hell-broth.