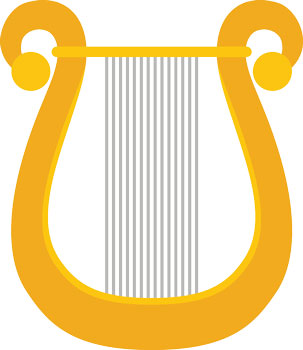 You are probably asking yourself the musical question, “How did Up & Coming Weekly’s copy editor let such a stupid mistake creep into the title of this stain on world literature?” Or you may even be asking a more profound question, “Why are these annoying columns impinging on my eyeballs before they get turned into fish wrap?” Alas, some questions don’t have answers. But as to the spelling of lyre, it is correct. Today’s visit into the swamp of free media is going to consist of a visit to our old Greek friend, the lyre-playing Orpheus. For those of you who may have missed the class on Ancient Greek Music Appreciation 101, a lyre is a small U-shaped harp.

We are exploring the story of Orpheus because the talking heads on the news are reporting on everyone calling everyone else liars. You have probably heard enough about Ukraine this week and who is lying about whom. So today, take a break from political liars and ponder musical lyres.

Orpheus was the Elvis of his day. He could pluck his lyre till the cows came home. When Orpheus sang and played the lyre, trees and rocks would dance, rivers would change course and lions would lie down with lambs. After listening to Orpheus, cannibals gave up human protein and became vegans. Orpheus was that good. Naturally being a Greek god helped as Orpheus had a supernatural musical talent that would have made John Lennon jealous. Like all Greek mythology, there are many versions of Orpheus’ story. Today you will get the version I like best.

Orpheus’ baby daddy was probably Apollo. The ancient Greeks didn’t have 23 & Me to test their DNA, so the paternity of most gods is a guess at best. As a lad, Orpheus had the old wanderlust. He scratched that itch by sailing with Jason and the Argonauts. On their course on the Love Boat, Orpheus and the Argonauts had to sail by an island populated by the Sirens. The Sirens were a bunch of bodaciously beautiful babes who were singers themselves. The Sirens made Jennifer Lopez look like a boy — if you know what I mean, and I think you do. Sailors would hear the Sirens singing and it was Katy, bar the door. To hook up with the Sirens, sailors would jump into the water and drown or crash their ships into the rocks, ending up in a watery grave. When the Sirens began belting out their songs for the Argonauts, Orpheus whipped out his lyre and played “Fire on the Mountain.” His music drowned out the Siren songs, letting the sailors keep sailing safely onward.

Like all Greek gods, Orpheus had a troubled love life, sort of like yours. But I digress. Orpheus fell in love with the elegant Eurydice. He proposed to her, and she accepted. Alas, the course of true love never runs smooth. At her wedding, Eurydice was walking around in the tall grass when she was set upon by a satyr. Satyrs have horns on their heads as befits a half goat and half man. Satyrs liked to drink and make whoopee. Eurydice knew all this. She ran to try to escape the satyr. Unfortunately, in her haste, she stepped into a nest of vipers. She sustained a viper bite to her heel, which caused her to expire. Sad.

Orpheus wandered lonely as a cloud while weeping piteously after he realized what he had done. He had some more adventures until he finally went to see the Oracle of Dionysus. A funny thing happened to him on his way to the Oracle. The Oracle had a cult following of women called Maenads. These ladies were wild dancers who did all sorts of things about which we cannot speak in a family newspaper. The Maenads were plenty riled up when Orpheus came into view. Unhappy with being interrupted, the Maenads tore Orpheus into shreds — even breaking his lyre.

What, if anything, have we learned today? To quote Winston Churchill: “If you are walking through Hell, keep going.”

Gentlemen, if you are lost, ask directions and follow them. If you come upon a crowd of ladies wilding in the woods, turn around. And as Andy Griffith once said, “Don’t ever, ever, mess with the ladies of the Altar Guild.”

Orpheus was the Elvis of his day. He could pluck his lyre till the cows came home.