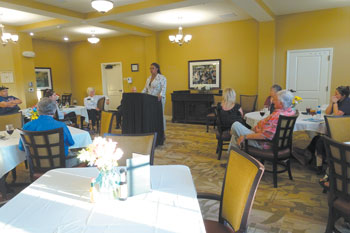 The political climate is changing in Hope Mills, and it is changing for the better. Why? Because residents are realizing that Hope Mills is no longer a media desert. The more informed Hope Mills residents are, the more they become involved and learn about the community and its challenges and opportunities and about the people entrusted with managing the town’s valuable assets. Through the citizens’ engagement, the town becomes more vibrant, relevant and livable.

Of course, all the above will take a little time and effort on the part of the residents. However, as the recent series of Community Roundtables sponsored by our newspaper and the Hope Mills Chamber of Commerce and the 2019 Candidates’ Forum sponsored by the ALMS HOUSE and hosted by the Hope Mills Shrine Club so aptly demonstrated, positive, constructive and open conversation combined with limited exposure to negative and gossipy social media outlets will make for more trusted, healthy and effective communication.
Get involved. This type of personal interaction has never failed to build relationships and net positive, constructive results. Eventually, it will displace that traditional nagging cloud of negativity that hovers over Hope Mills as a result of the abundant dissemination of hate talk, misinformation, deception and just plain lies perpetrated by selfish self-serving people, people who care more about themselves than the wellbeing of 16,000 Hope Mills residents.
Recently, a near-perfect example of this has been reported several times in The Fayetteville Observer. Hope Mills Commissioner Meg Larson has opted out of running for a second term because she couldn’t stomach the thought of serving another term with fellow commissioner Pat Edwards and Mayor Jackie Warner. Yet, she has allowed Lisa Carter Waring, writer for The Fayetteville Observer’s Sandspur and founder and administrator of the Hope Mills Chatter, a private, hatemongering social media blog that encourages and bolsters the childish antics of malcontents like Larson. Waring initiated a write-in campaign to re-elect Larson. Larson, by the way, has gone on record to declare that if she is elected she will serve, but only if political compadre, Mayor pro tem Mike Mitchell defeats Jackie Warner for the mayoral spot. If Warner wins, she will not serve. This is proof positive that these people have vindictive hate agendas. This is an explicit indication that the best interest and welfare of the town of Hope Mills and its residents are not being served.
In closing, this is my invitation for you to join us at the next Hope Mills Community Roundtable and see for yourself what a positive, progressive community Hope Mills is and meet the people who are making the difference.
Hope to see you there. Thanks for reading Up & Coming Weekly.