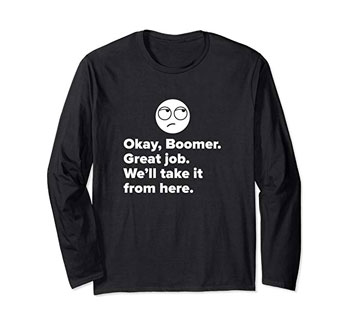 Maybe the story caught my eye because I have always been interested in baby boomers. I am, after all, a proud member of what was once the largest ever American generation, the 76 million born between 1946 and 1964 to parents of the Greatest Generation, thrilled that World War II was over and ready to get on with their lives. Boomers were the big bump moving through America’s demographic snake that has impacted everything we encountered from 1950s elementary schools to 2019 retirement communities.

Generational conflict is built into the human condition. Young people always think their elders are hopelessly out of step, and old people always think whippersnappers are a bit nutty. Over the last century, flappers of the 1920s thought their Edwardian parents too fogey for words. Parents of boomers found their own 1920s parents frivolous and hedonistic, and boomers were universally annoyed when their depression-raised parents turned off all the lights as they left a room and asked questions like “do you think money grows on trees?”

Now, no less than the “old gray lady,” The New York Times, reported last month that millions of teenagers shrug at their parents and grandparents who just don’t get it. They toss out the catch phrase, “Ok, boomer” to their elders, who in turn think the teenagers, sometimes called Generation Z, are simply unwilling to grow up. The words “Peter Pan syndrome” have been uttered.

What’s more, Gen Z is monetizing calling out boomers and millennials. A quick internet search confirms mountains of “Ok, boomer” swag, including bumper stickers, phone cases, socks, water bottles, bedsheets and more. Amazon has a large selection of “Ok, boomer” coffee mugs and T-shirts as well as my personal favorite, a sweatshirt bearing the inscription, “OK, Boomer. Great job. We’ll take it from here.” topped off with an emoji face rolling its eyes.

The NYT quotes 19-year-old Shannon O’Connor, who designed an “Ok, boomer. Have a terrible day.” T-shirt and received more than $10,000 in online orders. Said young O’Connor, “The older generation grew up with a certain mindset, and we have a different perspective. A lot of them don’t believe in climate change or don’t believe people can get jobs with dyed hair, and a lot of them are stubborn in that view. Teenagers respond, ‘Ok, boomer.’ It’s like, we’ll prove you wrong, we’re still going to be successful because the world is changing.”

Nina Kasman, 18 and also an “Ok, boomer” entrepreneur, was blunt. She told The NYT that teens believe older Americans are compromising younger ones. “Everyone in Gen Z is affected by the choices of the boomers, that they made and are still making. Those choices are hurting us and our future. Everyone in my generation can relate to that experience and we’re all really frustrated by it.”

Economists say teenagers have a point. Theirs is expected to be the first American generation whose quality of life will be lower than their parents enjoyed. Education is expensive, and few can afford health insurance if their parents cannot cover them.

While every rising generation sees its elders as at least a tad fogey, few younger generations have as many legitimate grievances as does this one. We elders — some would say perpetrators — would likely be angry as well.