The boldness we need 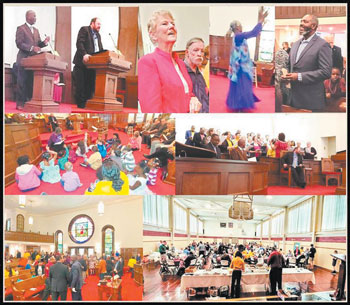 We live in a country and world that are in disarray, headed toward certain self-destruction. Our only hope is in turning to God and following the way that he calls us to. Our failure to make this turn is, for the most part, because far too many Christians and Christian churches are failing to act with the boldness necessary to influence such a change of course.

John Charles Ryle was an English evangelical Anglican bishop who lived from 1816 to 1900. In his time, he said something that accurately describes the American Christian condition: “There is a common, worldly kind of Christianity in this day, which many have, and think they have enough — a cheap Christianity which offends nobody and requires no sacrifice — which costs nothing, and is worth nothing.”

Rectifying this “cheap Christianity” and, thereby, saving this nation — and even the world — from impending doom, requires that a multitude of Christians stand up and demonstrate a kind of boldness that is almost extinct in our nation. It means leading people to unite based on their shared Godly values and beliefs. Coming to this state of being creates an atmosphere where the challenging conditions that divide us can be peacefully and successfully addressed. Essential to this process is the presence and movement of the Holy Spirit.

On Sunday, Oct. 20, I saw an unequivocal real-life demonstration of how this process of gathering around shared Godly values and beliefs can unite people and create an atmosphere where the challenges of our world can be successfully addressed. Making this event happen required tremendous boldness on the part of two Fayetteville pastors. Dr. Jamale Johnson is pastor of Mount Sinai Baptist Church and Rev. Rob James at First Baptist Church. Mount Sinai is a black congregation while First Baptist is nearly totally white.

Having never met, in the spring of 2019, both pastors agreed to participate in a pulpit exchange that as part of the AsONE Prayer Walk. This is an event where people of various ages, ethnicities, religious denominations and backgrounds gather to walk through downtown, stopping to pray at five designated stations.

When agreeing to participate in the pulpit exchange where one pastor would preach at another’s church, and vice versa, they were fully aware that they would probably be paired with a church where the majority of the people in the congregation were racially different from people of the congregation that they serve. Of the hundreds of pastors in the Fayetteville area, only a handful agreed to participate in this pulpit exchange program. In a time of tremendous racial divide and tension where this threatening condition worsens every day, these pastors exchanged pulpits April 7. Dr. Johnson preached at First Baptist and Rev. James at Mount Sinai. This was boldness in action.

Even bolder was the commitment by these pastors that they would not allow that pulpit exchange to be the end of their efforts to have the two racially different congregations work together. That commitment, that boldness, led to a joint worship service at First Baptist Oct. 20. We worshipped and then had a meal together.

The worship service and meal required cooperative planning by the pastors and members of both churches. The result was amazing participation in these two phases by members of both churches. That participation ran from a combined choir to Scripture reading, prayer, supporting musicians, a children’s sermon, liturgical dance and an offering donated to relief in the Bahamas. Johnson served as the worship leader, and Rev. James preached. Early in the worship service, Johnson invited the congregants to greet one another. Those greetings were genuine. Smiles, hardy handshakes and hugs were all around.

James’ sermon was titled “A New heaven and A New Earth” with Revelation 21:1-4, 22-26 as the Scripture focus. He explained that we live in times of harmful separations, divisions and distinctions driven by tradition, race, culture and even pain. However, when the kingdom comes and the new heaven and new earth (as described by John in Revelation) are in place, these harmful separations will be no more. Nearing the end of his sermon, James said  279 years refers to the combined time that Mount Sinai and First Baptist have served the Fayetteville community: “I don’t think we should wait for the coming of the kingdom to get a glimpse of it right now. And I don’t think we have to. Look around. Look at what’s happening this morning; something that hasn’t happened in 279 years. Two churches, two families of faith praising God together, joining in fellowship, in prayer, in song as one. What we are looking at this morning is a reflection of not just heaven, but of the new heaven and the new earth that God has had in mind from the very beginning of all things.”

In that combined worship service and meal, I saw an atmosphere where the challenging conditions that divide us could be peacefully and successfully addressed. Essential to this process was the presence and movement of the Holy Spirit. Giving life to this atmosphere conducive to societal healing requires a kind of boldness that is extremely rare in our time.
(Segments of this service, along with Rev. Rob James’ sermon, are available for viewing at:
https://www.youtube.com/watch?v=Sijb6PfHj0c)