Debates do not solve problems 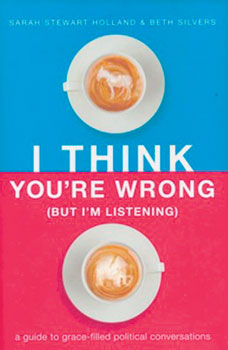 Watching all the problems that threaten the continued existence of America but go unsolved has brought me close to a state of despair. At times, our situation seems completely hopeless. In several columns, I have contended that the primary cause of our troubled condition is due to a turning from God and the ways of God. For me, that remains the primary cause.

However, I recently read an observation that further explains, as a society, our seeming inability to successfully address the simplest of problems. Sarah Stewart Holland and Beth Silvers are authors of a book titled, “I Think You’re Wrong (But I’m Listening).” At one point, they reflect on an experience during their podcast, Pantsuit Politics. Holland is a Democrat and Silvers is a Republican. They discuss politics. When discussing how best to achieve productive discussion of issues, they emphasize the importance of grace. They write: “Grace isn’t rolling over or acquiescing to those who have completely different values than we do. It is simply seeing our shared connections and acknowledging each other’s human dignity so that we can continue moving forward as a country.”

They go on to say, “Grace permeates most of our conversations with each other on the podcast — so much so that listeners often don’t even recognize our disagreements because it doesn’t feel like fighting.”

However, at one point, they decided to experiment with a different format. This format would make their differences more apparent. In actuality, they decided to debate one another. Over time, the debates shifted in tone. This quote describes the course of these debates: “However, as we continued, we began to occupy our predefined roles as a Democrat and a Republican. Beth defended the role of private industry in energy production. Sarah argued for an increased role for the federal government in environmental regulations. We bickered about the power and authority of state and local governments. We danced around our shared interests only to fall back into our conflicts over profit motivation and government corruption.

“Slowly but surely you could hear us begin to become skeptical of each other’s motives.”

The writers come to this conclusion: “In the end, what we realized is that debates aren’t problem-solving. They are dramatized events filled with manufactured conflict. We weren’t trying to find a solution that would make both sides happy. We were arguing that we were a better choice to solve the problem.”

The conclusion reached by Hollard and Silvers regarding debates is absolutely true; one only has to look at what is happening in America to know that their conclusion is astoundingly true. Start with a situation happening in Fayetteville. For months, Mayor Mitch Colvin and others have been highlighting alleged overwhelming opposition to construction of the North Carolina Civil War & Reconstruction History Center in our city. A public hearing regarding this matter was, at the urging of Mayor Colvin, held in the Council Chamber on Nov. 14. I attended the hearing but sat in an overflow room because attendance was substantial.

The mayor opened the hearing by explaining the meeting flow, rules for speakers and for general conduct. In my estimation, what followed was a very civil debate. Speakers shared their positions relating to the project. There were no questions allowed to be directed to speakers, no audience participation that would have provided for measuring the impact of what was presented by speakers. Further, there was no allowance for questioning facts or construction of arguments presented by speakers.

Regarding that meeting, a Nov. 24 Fayetteville Observer article titled, “Readers debate Civil War history center,” reported: “… around 300 people came to a public forum for the N.C. Civil War & Reconstruction History Center. Thirty-nine people spoke in favor of the center, five were against and four were neutral.”

Beyond this, a Nov. 16  Fayetteville Observer editorial titled “Our View: Public vote on Civil War center should not be ruled out” raised a possible action that, in my thinking, highlights the uselessness of debates in solving problems or deciding difficult issues. That editorial refers to a call by one speaker, Nero B. Coleman, for a referendum on the History Center. That is, let the voters decide the fate of this project. The Observer’s position is that a referendum “should not be taken off the table.”

Given how little attention the general public gives to a matter of this kind, while being influenced by emotion vice thoughtful examination of facts, a referendum would appear ill-advised. It would be like having a jury decide the fate of an accused person based on hearing 15 minutes of 25 hours of testimony. In a referendum, people would act based on having heard limited debate points, many of which would probably be misinformation.

As for me, I left the meeting impressed with most of the speaker presentations, but not sensing a coming together of citizens around some shared values and beliefs, some shared vision as to what is good for us as a city, state and even a nation. No, it was a matter of one group seeking to out-point the other.

Because that was the case, even though it was crystal clear, as The Observer reported, that the number of speakers who supported this project substantially outnumbered those who did not, the matter is still not settled. The battle for which group will control the fate of this project goes on. The fact of the battle going on is confirmed by what appears to be serious consideration of a referendum. This is what debate produces; ongoing battles that divide people into competing groups. No problems are solved, most people lose and a few win — for a moment.

If this local situation does not offer confirmation that debate is useless in solving problems, consider what is happening in the current impeachment inquiry. I watched the first day of public hearings being conducted by the House Intelligence Committee. That first day, I watched straight through all of it. The second day and beyond, I had to watch in 15 to 20 minute increments. That is, I would watch for those few minutes, take a break and come back for a bit more. That was the case because it was all debate, people trying to accrue points with the public. Like with the meeting at City Hall, I did not sense these politicians coming together around some shared values and beliefs, some shared vision, as to what is good for us as a country. It was a debate, and the destructive cost to this nation just keeps going up while no positive end is anywhere in sight.

Thankfully, these two experiences are not the end of the story. On a rainy and dreary Friday night, Nov. 15, I made my way to a meeting called by Councilwoman Tisha Waddell, District 3. Waddell’s purpose was to discuss several topics with citizens of her district and others who might be interested. It was a small group. Among the topics discussed were the “Build A Better Murchison” project, storm water management, sidewalks, street resurfacing and The North Carolina Civil War & Reconstruction History Center. Very capable individuals addressed the topics and answered questions regarding each. Clearly, by her comments, Councilwoman Waddell was well-informed relative to every topic.

The information flow and factual presentations were encouraging. Even more encouraging was the tone of the meeting. Councilwoman Waddell opened by reminding all of us that when the meeting was over, we would still be neighbors. Her use of “neighbor” clearly conveyed far more than living near one another. The message I received was that being neighbors demands that we give due consideration to others in our decision-making. It was not simply that she said it, but the way she said it. There was a ring of sincerity, a convincing call for us to rise above scoring debate points and focus on finding a mutually beneficial way forward. The vast majority of the people in the room appeared to make that shift.

My hope, my prayer, is that more and more Americans will recognize that we are neighbors and take hold of the grace that will move us from useless debate to productive discourse.