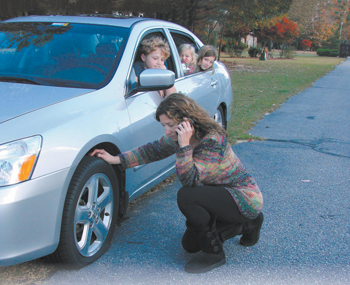 Walt Brinker, 1966 West Point graduate, retired US Army infantry lieutenant colonel and Vietnam War veteran, retired civilian project manager, instructor at FTCC, and Eastover resident, has provided well over 2,000 free-of-charge roadside assists as a hobby. With experience from these assists he wrote a book, “Roadside Survival: Low-Tech Solutions to Automobile Breakdowns” for the everyday motorist. He also set up a website, roadsidesurvival.com, to help individuals, driver education teachers and law enforcement. This vignette captures one of his many assists, along with lessons:

Fifty miles west of Augusta, Georgia, returning home from Baton Rouge, where I spoke to Louisiana driver education teachers, I stopped for a 30-something-year-old woman and her two young daughters in a Chrysler Sebring sedan on the shoulder of eastbound Interstate-20. She told me her battery light had been on for 15 miles before the engine stopped running, adding that her alternator was bad, which caused her battery to run out of juice for the ignition system. She had been on the phone with a mechanic friend who provided her that assessment. She had called for a tow, which had not arrived. I offered to charge her battery with my alternator using jumper cables; then I would follow her until her battery’s juice ran out and it needed a new charge. I extended my cables from my battery, over my car, to her battery and engine compartment. After we had charged the battery for 15 minutes, with my engine running and hers off, and her engine could run without my cables, she was ready to roll. Then the tow truck showed up. Its driver told her he liked my plan. To avoid paying for a tow she no longer needed, she released him. The tow truck driver advised us that about 25 miles ahead there was a rest area where it would be safer to recharge her battery than on the highway shoulder. I followed her to the rest stop. Her battery light had not come on, but I gave her another 10 minutes of battery charge — to ensure she could make it to Augusta. I recommended that once there, she proceed directly to a store with auto mechanics. She agreed. Many thanks from her and we returned to I-20.

Your vehicle will often “tell” you when it’s about to fail and you need to get it checked out right away. In this case, the car’s battery light was telling the woman to get her car to a shop right away, but she kept driving and the car died on the interstate.

1. Using a set of jumper cables, as I did, one car’s alternator can charge another car’s battery. Long (20 feet), thick (at least 4-gauge; 2-gauge is better) cables make the job much easier. Of course, to do this, the cables must be in the car, not at home in the garage.

2. Depending on the condition of the vehicle’s battery, such a charge may permit up to 40 miles of driving in daylight, but during night time, use of headlights will reduce this range to about 7-8 miles.