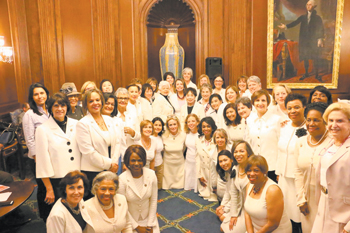 Americans who watched the president’s State of the Union address earlier this month saw a sea of women in glowing white garments. Democratic women legislators from Speaker Nancy Pelosi down to freshman members donned white dresses, suits and more in solidarity for the ongoing fight for women’s rights. This year marks the 100th anniversary of the 19th Amendment, which explicitly gave women the right to vote. Women have voted for a century now, often in greater numbers than our fathers, brothers and husbands. The women in white were joyously celebrating how far we have come and looking toward how far we have to go. A century of women’s suffrage constitutes less than half of the United States’ existence, and much of our nation’s history for women has felt like two steps forward and one step back.

The North Carolina Museum of History has put together a women’s history timeline, and here are some of the events specific to women in or from the Tar Heel state. Read it and see it for the mixed bag it is.

Creation myths from Native American tribes before there was either North Carolina or the United States identify women in various roles different from but as important as men’s roles.

In 1587, Virginia Dare became the first English child born in the New World in the Roanoke Colony. Her fate is unknown.

In 1774, in Edenton, 51 “patriotic ladies” gather to announce they are swearing off East Indian tea as long as it is taxed by the British. The Edenton Tea Party occurred less than a year after the Boston Tea Party and is one of the first political actions by women in what becomes the United States.

In 1809, North Carolina native Dolley Madison becomes our country’s fourth first lady. She is known for shaping the role of first lady, for saving a Gilbert Stuart portrait of George Washington when the British set the newly constructed White House ablaze and for serving a delicious new dessert, ice cream.

In 1813, Harriet Jacobs is born in Edenton to enslaved parents. Badly treated as property, Harriet lives secretly for seven years in her grandmother’s attic, escapes to New York, buys her children’s freedom and publishes “Incidents in The Life of a Slave Girl” in 1861.

In 1826, The General Council of the Cherokee Nation bucks tradition and drafts a constitution that excludes women from holding office.

In 1840, Mary Jane Patterson is born in Raleigh and becomes the first African-American woman to receive a college degree.

In 1859, Clinton resident Abigail Carter invents a pair of sturdy overalls for her railroad engineer husband. Other railroad men want them as well, and she becomes the first overall manufacturer in the nation.

In 1868, during post-Civil War Reconstruction, the North Carolina General Assembly adopts a new Constitution allowing women to own property and businesses, to work for our own wages, to sue in court, to make wills and to make contracts without our husbands’ consent.

In 1878, Tabitha Ann Holton passes the North Carolina bar exam and becomes the first woman lawyer in the South.In 1891, the General Assembly charters the State Normal and Industrial College as the first state-supported institution for women’s higher education. Today that school is known as the University of North Carolina at Greensboro.In 1893, the legislature allows women to cash checks and withdraw money from personal accounts without their husbands’ permission.

In 1913, North Carolina Supreme Court Chief Justice and women’s rights supporter compares the treatment of women to slavery. In 1925, Anna Julia Heywood Cooper becomes the fourth African-American woman to earn a Ph.D., hers from the Sorbonne in France. Cooper was born enslaved in Raleigh in 1858 and publishes “A Voice from the South” in 1892.

In 1943, more than a decade before Rosa Parks, 16-year-old Doris Lyon refuses to go to the back of a Durham bus. She is arrested, found guilty and fined $5.

In 2006, Fayetteville’s own Patricia Timmons Goodson becomes the first African-American woman on the North Carolina Supreme Court and in 2008, Beverly Perdue becomes our first woman Governor. Two steps forward, one step back.It all makes me want to wear white every day. We are not there yet.