Bizarro World: No friend to democracy or freedom 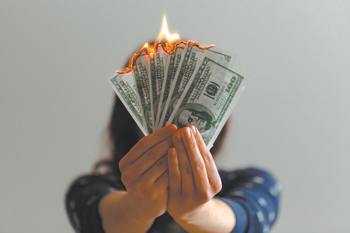 According to its Wikipedia page, the Bizarro World “is a fictional planet appearing in American comic books published by DC Comics. ... In popular culture, ‘Bizarro World’ has come to mean a situation or setting which is weirdly inverted or opposite to expectations.” Many Americans may feel like we are living in a “weirdly inverted or opposite” world.

If you are over 30 years old, you were probably brought up believing our nation was built on hard work and free enterprise. In America, we are free to work hard, study hard and express ourselves in totally uninhibited dimensions. These freedoms bring forth amazing, innovative entrepreneurial ideas and accomplishments —  ideas that give birth to more creative ideas and ventures that create opportunities and jobs that provide wages for families to exist, experience and enjoy America’s unique way of life. In turn, we have more ideas, more opportunities, more jobs and more wealth. And, the more wealth that accumulates the more opportunities for investment. These notions add up to be an abridged definition of capitalism with a capital C.

However, lately, many people in our country have been introduced to an opposing ideology: democratic socialism. Welcome to Bizarro World! It makes no difference what race you are or what your political stances are. Democratic socialism is an ideology that threatens our freedom, deteriorates morality, and just generally negatively affects our nation indiscriminately.
Along with this ideology comes ignoring our own laws. Illegal activities become legal. Good is perceived as being evil. For example, police and law enforcement once looked upon as guardians of humanity are now perceived as the enemy and have become targets of random hostility.  Immigration Customs Enforcement once honored for their valor in keeping Americans safe from outside threats are now chastised, ridiculed and harassed for doing their jobs. In spite of federal law, sanctuary cities are becoming prolific. In Bizarro World fashion, these cities can actually protect and harbor criminals whose mission is to rob, harm and terrorize innocent Americans regardless of race, religion or political affiliation. In Bizarro World, crime goes unpunished, prisoners get to vote, and victims’ voices are silenced or ignored.

It’s our government allowing this to happen and it’s our apathy that allows the government to continue the lying and mocking of our Constitution. And, while all this governmental dysfunction is going on unabated, much of the media has become a willing partner in creating and disseminating fake news, keeping Americans ignorant and uninformed.

Most Americans have no idea this new political ideology has been created: democratic socialism.

There is nothing democratic about socialism. This unorthodox ideology has radiated directly from Bizarro World for several reasons. Firstly, socialism is anti-capitalist. Secondly, socialism has never succeeded anywhere in the world. Thirdly, the biggest anti-capitalist, pro-socialist advocates are rich, very well-to-do millionaires. It’s easy for them to tout free health care, free college, free this, free that when never offering up a plan on how they are going to pay for these entitlements.

America was built on capitalism and a free enterprise way of life. As a result we have become the greatest nation in the world. We have succeeded where other countries have failed and continue to fail. Why would anyone think a made-up ideology like democratic socialism would work in America? It is my hope that people come to their senses and realize Bizarro World is not the real world. There is no such thing as democratic socialism; however, communism is real. In the real world, hard work, truth, mercy and goodness have always triumphed. That’s the American way!