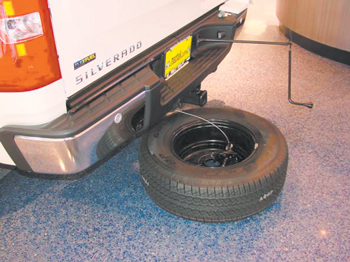 Walt Brinker, 1966 West Point graduate, retired US Army infantry lieutenant colonel and Vietnam War veteran, retired civilian project manager, instructor at FTCC, and Eastover resident, has provided well over 2,000 free-of-charge roadside assists as a hobby. With experience from these assists he wrote a book, “Roadside Survival: Low-Tech Solutions to Automobile Breakdowns,” for the everyday motorist. He also set up a website, “roadsidesurvival.com,"  to help individuals, driver education teachers and law enforcement. This vignette captures one of his many assists along with lessons:

On July 11, 2014, as I was descending from a high level at the large parking garage at Duke Medical Center, I spotted an older Chevrolet pickup with a flat left rear tire and a family standing around. The 40-something year old male driver, whom I’ll call “Willie," looked at my car as I stopped and rolled down my right-side window and asked him, “What do you need?” He replied, “I need air." Turns out his tire had gone flat while his family was in the hospital. He asked if I could pump up his flat tire, and I agreed to. I asked him whether he had a spare tire and would prefer me to mount it. I showed him the plug in the pickup’s rear bumper, which would need to be unlocked with his ignition key and removed in order to insert the segmented shafts to engage the spare’s lowering mechanism. He showed me his ignition key, which was missing ¾ inch off its tip, so it would not unlock the plug. I asked him how he started his engine with that key. He replied, “I have to jimmy it to make it work.”

I also offered to use my jack and other tools to remove his flat tire, find and plug its leak and reflate it. Willie replied that one of his children had a medical disorder that likely would cause him to become upset during such a delay. So I used my compressor to reinflate Willie’s flat tire. I reminded Willie that he needed to get his tire fixed right away, since it soon would be flat again. Smiles, handshakes, lots of thank-yous and we departed.

Walt’s tips:
• Don’t set yourself up to fail, especially with a family in tow: Bad ignition key that would barely start the engine and would not permit access to the spare tire. Cost to replace an older vehicle’s key: $8-$10.
• Without access to the spare tire, it’s just like not having one.
• Stowing a 12-volt compressor permits re-inflating low and flat tires with slow leaks — and spare tires that have gone flat.