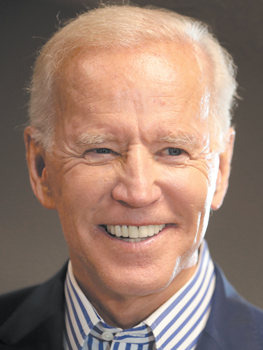 Column Gist: We live in a time when most American politicians will say anything, promise whatever appears politically profitable, to get elected. After being elected, the normal course is to forget promises and go along with what is dictated by the established political order. Every now and then, a politician comes along who is not malleable and does not bend to the will of the establishment.

In a recent column titled, “Malleable Politicians: As American as Apple Pie,” I assessed Mike Bloomberg as being a “malleable politician.” I contend President Donald Trump is a rare exception to the “Be Malleable” rule. Because he is an absolute exception, the political establishment, and a lot of everyday Americans, has no idea how to deal with him productively.

I do not know where former Vice President Joe Biden will stand in his run for the Democratic presidential nomination when this column is published. However, his primary argument for being nominated is that he can beat Trump. Polls show this is the No. 1 priority of most Democratic voters. Although he talks some about policies and issues, Sen. Bernie Sanders also leans heavily on the claim that he can beat Trump.

Much of the call for Trump’s defeat is driven by his refusal to bend to the norms expected of an American president and be the calm, nice-talking, noncombative, go-along-to-get-along, talk-and-do-little kind of person. Trump comes in talking tough, cussing, doing what he promised and not rolling over in the face of verbal attacks and baseless efforts to force him from the presidency. He is not politically malleable. Despite all the good he is doing for the country, that refusal to bend has brought him a level of onslaught that I cannot understand how he survives.

This is a sad state of affairs because, by just about any measure — excluding the high level of pure vitriol — one chooses, America is at a much better place today than three years ago. The scary fact is that the opposition, sometimes reflecting pure hatred of the president, is emotional. In this regard, I had an encouraging conversation with a young black lady a week before the 2020 North Carolina primary. She encouraged me to vote for Mike Bloomberg. I told her that was not going to happen. Then she wanted to know who I was supporting. After a bit of hesitation on my part, I told her I was a Trump supporter. I did not have the time nor the energy to go through the question, given that I am black, of how I could support Trump, which (to many) makes me a sell-out to my race. Then would come the part about me being stupid and a bunch of similar characterizations. Even further, she might pick up on my being Christian, and that would open the door for questioning the genuineness of my faith.

To my absolute surprise, this young black lady said to me, “I don’t have a problem with Trump. If people would get beyond their emotions and look at what he is doing, they would appreciate him.”

She went on to list some of the president’s accomplishments. I confessed my surprise, told her how encouraging it was to hear what she said and that she did so with conviction. I thanked her and we parted ways. In my estimation, that young lady understands how to move beyond emotion to the examination of facts.

A prime example of how emotions and thought manipulation push reasoning aside showed up in the 2016 presidential race. Candidate Trump encouraged black Americans to vote for him. Then he asked the question that reverberated across the length and breadth of America, “What the hell do you have to lose?”

The outrage from most black Americans, and many others, was deafening. This was seen as an affront, disrespectful and maybe even racist.

My response was to ask three questions. First, what did Trump mean by I had “nothing to lose?”  It was clear to me that he was saying Democrats have done nothing of substance for blacks in America and, therefore, I put nothing at risk by voting for him.

Secondly, given that understanding of his point, is it true? My position is that Democrats, throughout my life, have done absolutely nothing of substance to help blacks in this country. Consequently, I saw his “nothing to lose” as accurate.

The third question was: Should I disregard his argument because his language was a bit coarse? No, I went right past the coarseness of his language to the truth of the facts supporting his statement and the accuracy of his assessment. Forthrightly, transparently, stating facts and accurately assessing them is not a common practice in American politics. It follows, then, that this kind of conduct by Trump is a turn-off for some people, and it definitely puts him at odds with the American assemblage of so many malleable politicians.

With Trump in office, black Americans have, and are, realizing tremendous gains.

The examples of Trump refusing to follow the rules that govern American political conduct are almost without end. Roger Stone is a Trump supporter who was involved in his 2016 presidential campaign but not officially on the staff. In November 2019, Stone was found guilty on seven counts, including perjury, witness tampering and obstruction. Robert Mueller’s investigation prompted this prosecution. Note that none of these charges were connected to misconduct or criminal actions in connection with the actual premise of the Mueller investigation. All these crimes allegedly happened because of, and in the course of, Mueller’s investigation.

Before Stone’s sentencing, the prosecutors recommended that he serve 7-9 years. Trump spoke out against this recommended sentence, arguing that it was excessive. He also (I think with good reason) pointed to Democrats and FBI personnel whose conduct was similar to that for which Stone was tried, yet no charges have been brought against them. There was tremendous condemnation of the president because he spoke up before the sentencing. Again, this is a case of people disregarding the facts, refusing to do transparent and honest assessing of facts and seeking political advantage while expecting that a president would be quiet in the face of injustice.

Beyond what has not been done to Democrats and FBI personnel, how what was recommended for Stone compares with sentences for others should be considered. An article by Joe Carter titled, “7 Figures: How long do criminals spend in prison?” states: “By offense type, the median time served was 13.4 years for murder, 2.2 years for violent crimes excluding murder, 17 months for drug trafficking, and 10 months for drug possession.”

Granted, this speaks to state prisons, while Stone’s offenses were federal. However, even if federal statistics are a bit higher, 7-9 years for what Stone was convicted of is excessive, and that is what the president contended.

There was much more fallout from the Stone case, but the point here is that Trump did not follow the American political norm and keep quiet in the face of injustice. He was not malleable.

I hope there are more people than I think who follow the approach of that young black lady. Americans who move beyond emotion to examine facts and reach conclusions based on accurately assessing those facts. As she said, for those who oppose Donald Trump based on emotion, this approach might lead to an appreciation of him.