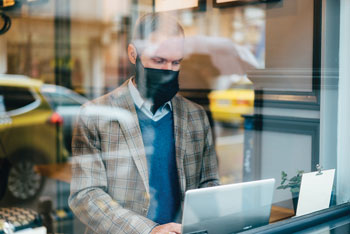 Numbers and statistics can be misleading. This week, our publisher, Bill Bowman, yields his space to Jimmy Jones for a more skeptical look at the statistics in the age of COVID-19.

In the last few weeks, we have heard a lot about how our government officials are “following the data” and “following the science.” Here is the problem. I do not believe the majority of people trust their data or their science. I think we have a difficulty understanding what is factual and what is theoretical, and we are letting it confuse our decision-making processes.

When the United States of America bombed Japan in World War II, it killed and wounded an estimated quarter of a million people, and the world entered the nuclear age and an atomic race. I grew up in the ‘60s. In the first grade, we watched films about what to do during a nuclear explosion. The film would tell us, “don’t look at the blast,” “hide under your desk” and “duck and cover.” I now realize that this was a theoretical test of the American population. Now I know that the shockwaves would bust my eardrums and lungs, and the thermal radiation would melt my skin. Somehow, the government knew this and convinced its citizens that this was factual. Educators across the country showed us this movie, and we practiced hiding under our wooden desk — and no one questioned it.

Last year, hurricane Dorian came. We watched as officials, scientists, meteorologists and that guy from the Weather Channel tell us that Fayetteville was in the path of a Category IV storm. Factually, the storm did come. Theoretically, it could have hit land as a Category IV and come to Fayetteville. Factually, it hit near Jacksonville with tropical-storm-force winds. These predictions are not done blindly but with thousands of sensors, satellites and Air Force C-130 airplanes flying into the storm. There are so many factors that you cannot accurately predict the course of nature. Often, we take theoretical information and try to make factual predictions, usually to save lives.
As we hear the “breaking news” on the coronavirus showing us the data, people are starting to discover that the data does not seem to make sense. If you have had the coronavirus or lost someone from this, I am not discounting your pain, grief or loss.

Nature is running a course, and we cannot see it. There are only four factors that we all have to understand. We will get the virus, or we will not. If we do get it, we will live or die.

Every day the news flashes with the numbers of COVID-19 cases, the number of new cases and the number of deaths. These numbers mean nothing because they cannot be collated because not everyone has been tested nor are there enough tests. To make it useful, the entire population would have to be tested at the exact same moment while separated six-feet apart. Then we would need to check everyone across the world for a two-week period. We might then get an accurate count. Many deaths of high-risk people — those who were already in jeopardy of dying from some other health issue — are often included in the COVID-19 statistics, but that is not reported. I don’t know if these numbers are continually being blasted to us because the government and media think we are stupid or because we are dumb enough not to understand.

The number of cases that the government report on COVID-19 does not report how many people are contagious at a time. That is a number we could use to make educated decisions. Symptomatically, this is hard to diagnose because the list of symptoms continues to grow. It is hard to tell if someone has COVID-19, the flu or allergies without a test. We use to look at someone who sneezed and say, “God bless you.” Now, we may say, “God bless you,” but we are thinking, “Run!” “Don’t get me sick,” and, “I hope you don’t die.”

Social distancing is not going to work. This is the same as having to hide under your desk in a nuclear explosion because we are a community of people. We are social beings. From birth to death and in between, we long to be in touch and interact with people. In my opinion, I do not want the government to tell me what to do, where to go and who I can see in a free society. I prefer our leaders to recommend, “stay safer at home,” but the king of our state ordered us to “stay at home, close our businesses and wreck our economy while bureaucrats pick who can do what in the name of social distancing. No person or representative in a free society should ever have this kind of power over the people.They are elected to represent us, no matter the circumstances. These people either do not understand the Constitution, or maybe they just decided to run rampant over it to protect their kingdom.

Looking at the blame game of where it started is just a waste of time for the common person. The United States government could not find who released anthrax in Washington, D.C., in the deadly attack in 2001. After that event, the government told us to use plastic and use duct tape to seal our doors and windows. They should have just told us to put plastic bags over our heads and say, “Good luck.”

The government needs to work on its credibility. It is your responsibility, and the right thing to do, to protect yourself as you see fit. If you are sick, stay home. If you are high risk, don’t go out. If you go out, I recommend that you have your will updated and have a “do not resuscitate” order in place, if that is what you wish.

Until there is an effective vaccine, there are risks, and nature will run its course. The numbers are in our favor to survive.