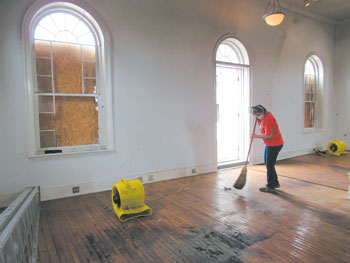 As I write this editorial, no doubt city officials have already met to “circle the wagons” to come forth this week disseminating a consistent and coherent message, as they pat themselves on the back, proclaiming to the public what a great job they did in managing the protest, riots and unrest that took place over the weekend. Many will certainly disagree. I sit here Sunday evening with a heavy heart at the devastation and violence and destruction that has been perpetrated on our community in the name of George Floyd. His death was a travesty; however, to loot, steal, burn and pillage personal property in his name is beyond reprehensible. Fayetteville, North Carolina, our hometown, was transformed into a criminal flashpoint — as were about 30 other cities across the country.

In Fayetteville, our leadership really blew it on multiple fronts. I have written several times about the lack of vision, talent and leadership in our community. The horrifying events of last weekend only confirm this. As I watched the carnage taking place on Hay Street and across our community, my only thoughts were: Where is the mayor? Where are the police? Where is the Fire Department? Where are our community and government leaders, and why are they not present?

It is incomprehensible and unacceptable that in the city of Fayetteville and county of Cumberland, where we have people of color in the most trusted, prominent and vital positions of leadership — the mayor, city manager, city attorney, seven out of nine City Council members, the police chief, fire chief, Cumberland County Sheriff, Cumberland County Schools superintendent and three Cumberland County Commissioners — that no one stepped up to even try to address the protesters and calm the crowd for the safety and welfare of the community. Where were all the black pastors and clergy from the dozens of African American churches in the community? Where were all these encouraging voices of love, fellowship, compassion and reason? The good reverend, Dr. Martin Luther King Jr., must be turning in his grave after witnessing the criminal acts being invoked in his name.

The leadership capacity of City Hall is meant to serve and protect Fayetteville citizens. These duties are not just reserved for law enforcement. Here, the mayor and all of the City Hall departments were derelict in their duties. Not just because our leaders were unsuccessful in their efforts — but because they didn’t even try! They were complicit to the carnage and must be held accountable.

Saturday night in downtown Fayetteville was a horrid spectacle. It was made worse by the fact that no effort was made to protect the citizens, personal property, city property or the businesses that employ hundreds of residents and have been the lifeblood of the downtown revitalization effort — the very economic revitalization that our leadership supposedly has been advocating for and the taxpayers have been generously paying for. Yet, they collectively acquiesced and sat back and did nothing.

Fayetteville and Cumberland County leaders need to rethink the vision for our future and how they are going to get us there. A good friend told me something that rang so true: “In every case,” he said, “friction eventually destroys.” He is right — car engines, marriage conflicts, employee relations, personal and business relationships — friction eventually destroys any opportunity for progress or resolution.

Our community will never be all it can be with leadership that is so self-absorbed in unilateral racial motives. This protest and rioting situation have exposed the ugly but inevitable truth that race alone doesn’t make a person a leader, nor does it make someone smart. And it definitely doesn’t keep a person from being an opportunist — especially when they yield to protest organizers and allow them and their disciples to become the pied pipers of destruction, looting and criminal intent.

Fayetteville and Cumberland County are at a crossroads. Real leadership is the only thing that can save this community. Who will step up? More importantly, who should step down?