During the current Corona Cooties crisis, it’s time we all began to think seriously about the kind of world we want to leave behind for Keith Richards. No one, no civilization, lasts forever, with the only exception being Mr. Richards. Able to survive years of curious multiple-substances ingestion, able to fall from a coconut tree on his head without permanent damage, longer-lasting than a Twinkie or a cockroach, the unsinkable Mr. Richards goes on and on into the future. Once America is gone, once we are all gone, what kind of legacy will we bequeath to Mr. Richards? It is a question made even more timely with the two-week interval between America’s coming out party on Memorial Day and the surge of Corona, which is sure to follow.

I got to thinking about Mr. Richards when I realized that this column would disgrace the annals of journalism by appearing the week of June 3, which, coincidentally, is the anniversary of the Rolling Stones’ first American tour in 1964. Climb into Mr. Peabody’s Time Machine to go back to June 5, 1964, in San Bernadino, California, where the group had its first American concert. The Stones’ song setlist began with “Not Fade Away,” included “Route 66,” “Walking the Dog,” and finished up with “I’m Alright.” The Stones were billed by the radio station sponsoring the concert as “the ugliest band in England.” The Stones opening acts on that tour included Bobby Goldsboro, George Jones and Bobby Vee. 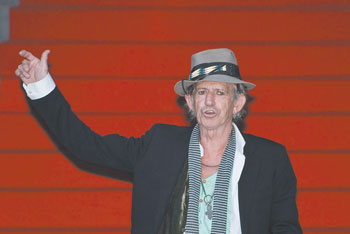 The combination of the Rolling Stones and Bobby Goldsboro playing the same gig boggles the mind. Bobby went on in 1968 to write “Honey,” possibly the worst song of all time. Bobby’s song mourns his lost love, a gal named Honey, who cried over movies and wrecked his car. The immortal lyrics include: “See the tree how big it’s grown/ But friend it hasn’t been too long, it wasn’t big/ I laughed at her, and she got mad/ The first day that she planted, it was just a twig … She was always young at heart/ Kinda dumb and kinda smart, and I loved her so/ (Honey then gets called home by the angels) … And now my life’s an empty stage/ Where Honey lived, and Honey played and love grew up/ A small cloud passes overhead/ And cries down on the flower bed that Honey loved/.” Gentle Reader, if you can hum these lyrics from memory and not throw up a little bit in your mouth, you are a better person than I.

The bizarre combination of the Stones and Bobby Goldsboro might only come close to being matched by a Janis Joplin concert in Chapel Hill that I attended in Carmichael Auditorium in February 1969. This concert paired Janis with the opening act of Gene Barber and the Cavaliers. Janis was wild and crazy San Francisco rock; Gene and the Cavaliers were pure beach music. The crowd was not there to hear beach music. Gene was not well received. It reminded me of the scene in the Blues Brother’s movie where the boys are playing “Rawhide” at Bob’s Country Bunker red neck bar behind a chicken wire fence dodging thrown beer bottles. Gene did not get to finish his set. Cooler heads prevailed. He was hustled off the stage before he came to bodily harm from the fans who had not come to shag to beach music.

Speaking of strange stage fellows, another odd coupling of bands that nearly rivals Bobby and the Rolling Stones was when the Jimi Hendrix Experience was the opening act for The Monkees in July 1967. Imagine a time when “Pleasant Valley Sunday” and “The Last Train to Clarksville” took precedence over “Purple Haze” and “The Wind Cries Mary.” You cannot make this stuff up.

Odd combinations are not limited to the world of Rock & Roll. In an episode of “Curb Your Enthusiasm,” Larry David has a sandwich named after him at his favorite delicatessen. The Larry David sandwich is a temptingly hideous combination of whitefish salad, smoked black codfish, onions, cream cheese and capers. Larry is greatly offended by the contents of the sandwich and tries to switch sandwich names with Ted Danson. If this plot sounds too involved or trivial to be concerned about, you are probably right. Not every sandwich can be a gem. Larry’s dismay with his namesake sandwich is what is known as a First World Problem.

But what does all this have to do with Keith Richards and the Rolling Stones’ first American concert? Not much. But lest we forget, 1964 is a long time ago. Fifty-six years to be exact. Keith was alive then. He’s alive now. He will be alive long after we are all gone. So, if you were expecting some sort of coherent point to this column, remember — you can’t always get what you want. Time may not be on our side, but it certainly is for Keith. If life offers you a Larry David sandwich, don’t eat it. Paint it black. It’s an election year, be sure to get your fair share of abuse.

Goodbye, Ruby Tuesday, who could hang a coconut on you? See you in two weeks if the Cooties don’t get us first.