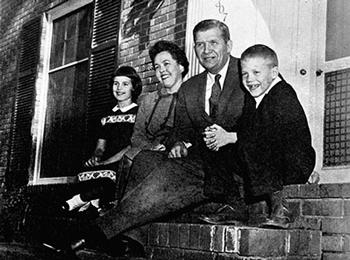 Raleigh political pundit and writer Gary Pearce posed an interesting question last week during this tense and racially charged time in our state and nation.

“What would Terry Sanford do?”

Terry Sanford was a man of great accomplishment. A country boy from down the road in Laurinburg, he was an Eagle Scout who later parachuted into France during World War II and was awarded a Bronze Star and a Purple Heart for his efforts. He became an attorney and settled into private practice in Fayetteville, a small city whose size he liked and was not far from his hometown. Sanford had political aspirations, though, and spent a term in the North Carolina Senate before being elected governor in 1960. The Sanford family decamped from their Haymount home for four years in the Governor’s Mansion and later onto the national stage as Sanford became president of Duke University, a United States senator, and a two-time candidate for president of the United States.

Sanford’s is a storied history of service to North Carolinians and Americans in both politics and education, but it is his time as governor that Pearce references. Sanford was elected governor the same day John F. Kennedy was elected president, sharing the same platforms and with the same dreams. Sanford was an outlier in the South, a part of the country still mired in Jim Crow segregation and with strong and openly white supremacist leaders. Sanford defeated just such a candidate in the Democratic primary, a man who vowed to preserve racial segregation. Once in the Governor’s Mansion, Sanford forged ahead of other Southern leaders by supporting increased education funding, promoting higher education, including the establishment of North Carolina’s community college system. He promoted antipoverty programs, including establishment of the privately financed North Carolina Fund, a structure that insulated the fund from the protests of segregationists.

Sanford’s most enduring legacy, though, may be his support of civil rights and improved race relations, earning North Carolina a reputation as a progressive Southern state. By the time Sanford took office, segregation had been largely struck down by various courts but was still ingrained. He came into office concentrating on other issues but realized that racial discrimination underlay all aspects of daily life in North Carolina. He then appointed African Americans to state positions and integrated our state parks. He established what he called the Good Neighbor Council to facilitate communication and nondiscrimination and to prepare young people for the workplace. Sanford arranged for an FBI agent to infiltrate the Ku Klux Klan in North Carolina, finding that our state was home to one of the nation’s largest Klan chapters.

While all this sounds pretty tame and anachronistic by today’s standards, it is important to remember that Sanford was virtually alone among Southern governors and other leaders in the stances he took and the efforts he made. Billboards supporting the Klan could be spotted on North Carolina’s roadways as late as 1977, a clear indication that our state was not past its segregationist heritage. Sanford’s legacy is that he spoke up when he saw injustice at a time when few Southern leaders did.

The legendary Kareem Abdul Jabbar, whose only connection to North Carolina, as far as I know, was beating the socks off the UNC-Chapel Hill basketball team in the 1968 NCAA championship game, sums up our situation this way. “Racism is like dust in the air. It is invisible — even if you are choking on it — until you let the sun in. Then you see it’s everywhere. As long as we keep shining that light, we have a chance of cleaning it wherever it lands.”

That was true in Terry Sanford’s day and it is true in ours.