The most wonderful time of the year — election season 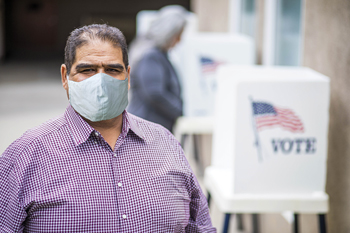 It’s that most wonderful time of year — a time of sweetness, light and goodwill toward men. It’s the summer run-up to the presidential election of 2020. It’s a time for civil, reasoned political discourse. A time for love, a time for joy. A time for thoughtful conversations about the direction of government. A time when Americans of all political stripes link arms, sing “Kum Ba Yah,” and arrive at a mutually agreed consensus about where we want to go as a nation. Ha! Fooled you. None of the above. Let’s get ripping and roaring, tossing invectives, stink bombs and fake ads at the other side. As “Where the Wild Things Are” advised: “Let the wild rumpus begin.” Each side will accuse the other side of being in league with Satan. Both sides will screech, “This is the most important election in the history of America.” Every four years we have the most important election in the history of America. Someone needs to come up with a new slogan.

We will have a choice between another four years of Dear Leader’s curious antics and Joe Biden’s calmness. Personally, I am riding with Biden. If you are a true believer in all things Trump, this column is not going to be beneficial to your blood pressure. Kindly stop reading it. Go to your safe space on Fox or OAN. At least take some Phenergan to prevent nausea if you persist in reading this drivel despite the trigger warning that it will be unkind to Dear Leader.

Perhaps you have seen the picture of a dejected and disheveled looking Dear Leader walking from the helicopter after the Triumph in Tulsa rally. He appeared to be a Conquering Zero. Think of General Lee after Gettysburg or the Carolina Tar Heel basketball team walking off the floor after the loss in the Final Four to Indiana in 1981. He looked that bad, his red tie dangling forlornly, crumpled MAGA hat in hand. It was bigly sad. The blue wave turned out to be wall-to-wall rows of empty blue seats in the BOK arena. Apparently, some of the vacuum in BOK was created by teenagers with cell phones calling in fake reservations. The leader of the free world got punked by teenagers. If the White House can’t figure out how to deal with bored teenagers, what does that say about Dear Leader’s ability to deal with Vlad Putin and China’s Chairman Xi on matters more weighty than phony phone calls? Like the King of Siam said, “It is a puzzlement.”

Would you buy a used Pandemic from this man? Maybe you would. Maybe America will too. Despite Biden’s apparent lead in the polls, we all remember what the polls said about President Hillary Clinton before the actual election. Ain’t no guarantee that Biden will win. Dear Leader might well be like Bullwinkle J. Moose and pull another rabbit out of his presidential hat.

Trouble remains right here in River City with 40 million +  unemployed Americans. The COVID cooties have killed over 120,000 Americans as this column slouches toward the printing press. The Black Lives Matter remains front and center. The stock market is up despite the pain on Main Street. Someone wiser than I said that the Dow Jones average represents how rich people feel about money, not what is happening in the actual economy where people live. It’s a veritable constellation of crud. Something is happening here, and you don’t know what it is, do you Dear Leader?

Let us assume for the moment that Biden gets elected. As William Butler Yeats once wrote, “’What then?’ sang Plato’s ghost. ‘What then?’” He will have a bit of a mess to clean up, beginning in January 2021. Joblessness, pandemic in double full bloom and troubles on the streets all await the next president. Fixing the mess reminds me of one of the 12 labors of Hercules. Hercules had been made insane by the goddess Hera. While he was crazy, Hercules killed his wife and family like the Overlook’s caretaker Charles Grady in “The Shining.” Once his crazy passed, Hercules was grief-stricken and wanted to make amends. Like Alcoholics Anonymous, Hercules was assigned a 12-step program of seemingly impossible tasks to gain redemption.

Hercules was given the job of cleaning out the Augean Stables in a single day. These stables housed thousands of cattle, sheep and horses. These critters produced a prodigious amount of poop. The stables had not been cleaned out for over 30 years. There was a lot of stable mucking to be done. A lesser man might have given up before even starting to shovel. Hercules believed in working smarter, not harder. He dug a giant ditch and diverted two rivers into and out of the stables. This successfully carried away three decades of poop. The Environmental Protection Agency did not exist then, so no federal regulations on the discharge of animal waste were violated.

If Biden gets elected, he will have a fair amount of stable cleaning to enjoy. If Dear Leader gets reelected, even though he is a very stable genius, I suspect the stables will just collect more poop. Let the wild rumpus begin.