Revisiting the “Eulogy for the Fourth Estate?” 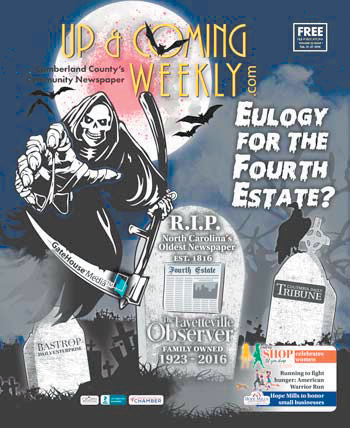 Editor's note: On Feb. 19, 2018, Up & Coming Weekly published an article called “Eulogy for the Fourth Estate.” We quoted former Fayetteville Observer publisher, Charles Broadwell, in that article. He recently reached out to UCW. Here is a link to the piece in its entirety.
https://www.upandcomingweekly.com/views/4794-eulogy-for-the-fourth-estate

With so much going on in the world and with the professional news media being tested in unprecedented ways these days, I wanted to clarify something that was published in Up & Coming Weekly from February 2018.

Yes, that was a long time and many news cycles ago. But the article, headlined “Eulogy for the Fourth Estate?” has been gnawing at me because of a quote attributed to me as the former publisher of The Fayetteville Observer.

The article focused on changes to The Observer since our family-owned company sold the newspaper in 2016. It included a lengthy excerpt from a piece published by The American Prospect about the decline of community-based newspapers across the country that quoted me as saying, after the sale of The Observer, that “It was like walking around at my own funeral.”

The American Prospect writer did his job and quoted me accurately; in fact, he called me back after the interview to double-check things. What somehow got lost in translation, unfortunately, is that my comment was simply about how I felt after the sale. I had just learned that I would no longer be part of The Observer after a transition period. I knew it was likely that any new owner would want to bring in a new publisher, but the reality had hit me hard that my life at the newspaper was over. So that was the reason for my comment that inspired the headline — no more, no less.

I decided to let it pass instead of stirring up more dust, trusting that my former colleagues would understand, but I regret if this self-focused (if not self-centered) comment may have left the wrong impression.

In my last column for The Observer four years ago this month, I expressed my faith in the newspaper’s enduring strength, and that’s exactly how I felt. Today, facing even more challenges than we did during my 16-year tenure as publisher, the good people of The Observer continue to work hard to serve the community every day. They are personal heroes to me.

Thank you for allowing me to clear the air and clear my conscience.