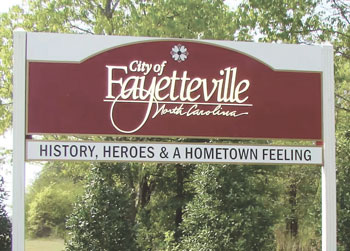 Make no mistake about it. I love Fayetteville. I arrived here as a 19-year-old soldier and never left. I was educated here and immersed myself into a successful marketing career. It was here that I met Leonard G. McLeod, who ultimately became my most valued, endearing and closest friend until his death nearly two decades ago. It was here I met my loving and supportive wife of 40 years, Merrilyn. This is where we raised our son — in an atmosphere that embraced and radiated pride, patriotism, love, support and exciting anticipation for the unlimited opportunities awaiting the future of a growing and emerging community.

It was here in Fayetteville, 25 years ago, that I started the Up & Coming Weekly newspaper. The purpose and premise of this unique local publication was simple and easy to articulate — promote the good news about Fayetteville and Cumberland County. I wanted to share the wonderful stories about the people, events and quality of life of Fayetteville that I knew existed here. During my lifetime, I watched some of the most dynamic civic and government leaders ever assembled as they worked diligently and harmoniously to catch the glimmer and sparkle of the diamond called Fayetteville hidden and stagnant so long in the rough.

Fayetteville was no longer a hidden jewel nor a diamond in the rough. My city was starting to emerge as a significant North Carolina municipality, proud and economically independent, ready to be a contender and take its rightful place in the hierarchy of other thriving North Carolina cities. Well, that was then and this is now. Now, our community finds itself in a state of confusion bordering between shock and depression.

What happened? Our leadership collapsed.

1963 happened. Read about it on pages 14 and 15. We, as Americans in the greatest nation on Earth and under the security blanket of the U.S. Constitution, have taken our Founding Fathers’ freedoms for granted. We have ignored and forgotten the evil, cynical entities and diabolical governments that have been methodically and patiently plotting to take away our freedoms and our country.

Fayetteville is only one microcosm of that malicious movement, and it boils down to our leadership. Or, in Fayetteville’s case, our lack of leadership. Mayor Mitch Colvin and Police Chief Gina Hawkins have perpetrated a harsh injustice on our community by not implementing and demonstrating leadership that is representative of the safety and well-being of all the citizens of the Fayetteville community. By encouraging, endorsing and siding with the protesting Black community, they left the white, Asian, Hispanic and Native American Fayetteville citizens wondering what happened to their representation and assurance of safety and protection?

Making matters worse, they were not supporting protesters exercising their constitutional rights; they were supporting criminals, gangbangers and lowlifes whose only objective was to rob, steal, destroy personal property and cause mayhem. Colvin and Hawkins gave them a pass while laying bare to the community that “standing down” is their new standard-bearer. It is horrible leadership. Now, Fayetteville may be at a point of no return.

This unfortunate situation will continue as long as good citizens remain on the sidelines and remain silent. We can no longer afford to be victims of our empathy, inaction and lack of involvement. The letters in this edition are a very few of the dozens of letters, emails, texts and phone calls our newspaper has received since the May 30 incident — the devastation of downtown — and since the Citizen Cares Project march on July 9 in support of Fayetteville’s police officers. Many others are afraid to speak up for fear of the cancel culture retribution. The fear is real. Fear they will be called a racist. Fear their families will be harmed. Fear their property will be damaged. Fear their businesses will be destroyed. Fear their good works and good names will be tarnished beyond repair.

Thirty years of hard work was destroyed within days, and our leadership displayed little if no remorse, justification or accountability for their actions. That brings me to my closing point: We have brought this upon ourselves. We allowed this level of incompetent leadership to infect our community as apathy moved honest, competent, hardworking dedicated leaders who really cared about Fayetteville to the sidelines, making way for those with little concern about the welfare of city residents or advancing the community and enhancing the well-being of the citizens.

Well, these fears are real and intentional. Like a deer in headlights, so many in this community feel helpless and distressed. They are thinking, hoping and praying the situation will fix itself. It will not. Read the Socialist/Communist Manifesto written in 1958 and entered into the Congressional Record in 1963. You will see the problem will not fix itself.

I greatly admire and appreciate the people who have agreed to stand up and speak out and make their voices heard about how they feel about our community and what’s taking place in it at this very moment. Now is the time we must muster our resolve not only for the preservation of our community but for the protection of our rights and freedoms as Americans. Fayetteville needs real leaders. Who will it be? Will it be you? Let’s hope so.