Ask Mr. Science: Why is it so hot? 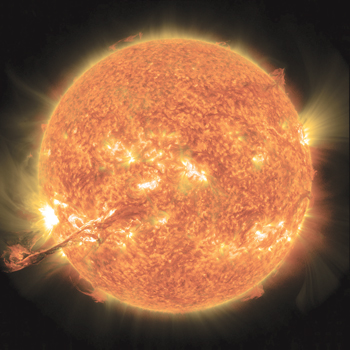 In case you haven’t noticed, it is a bit warm outside. Not just a wee bit toasty. We are talking second circle of hell toasty. Have you been wondering why the heat? Are you tired of saying, “It’s not the heat. It’s the humidity.” Go ahead, say it again. It won’t cool the temperature, but it will make you sound wise to whomever you are trapped inside with during Corona time. Trigger warning: Be careful how often you say it, as you may irritate your housemates into murdering you in your sleep. As only about five people read this column, the loss of even one of my gentle readers would cut my audience by 20%. Please say it sparingly.

If you have gotten this far without throwing up a little bit in your mouth or falling asleep, stick around. The reason for the unseasonably seasonable heat will be laid beneath your feet like a cloak across a mud puddle placed by a gentleman for his lady love. You may have seen the pictures of the sun from NASA’s Parker Solar Probe. The images are spectacular. Kindly absorb some facts: The Solar Probe

The reason the sun is so hot is that it is on fire. Fire is hot. The sun is a flaming gasbag of fire, not to be confused with Mitch McConnell speaking in the Senate. The sun is 109 times bigger than the earth. That is enough heat to cook a whole passel of s’mores if you could get close enough. Mr. Science says the sun has been hanging around about 4.6 billion years. It is used to being alone. The sun is getting up in years. Sol is cranky like an old man yelling at the kids, “Get off my lawn!” The Solar Probe is now messing with the sun’s corona.

Some readers may remember the old ad in which Mother Nature is fooled into thinking that Chiffon margarine is actually butter. When Mother Nature finds out it is margarine, she becomes wrathful. She brings on a violent storm yelling, “It’s not nice to fool Mother Nature!” Same thing applies to the sun. Unhappy at having his solar corona disturbed by the Solar Probe, old Sol sent the coronavirus to Earth to smite us mere mortals with COVID and excessive heat. It is not an accident. The ancient Egyptians foretold this eventuality with their story of the sun god Ra.
Give me that old-time religion. Ra showed up in the 25th century B.C. as the King of the Egyptian gods. He created humans from his sweat and tears. Egyptians viewed the sky as a giant celestial cow, calling themselves the cattle of Ra. The celestial cow was not a carnation-contented cow. Ra crossed the sky each day on the morning boat the Mandjet and then left at night on the good ship Meseket to travel through the Underworld, only to pop up in the East the next morning. Each night, a giant snake named Apophis would try and fail to stop Ra from showing up the following day. As usual, humankind tried to overthrow Ra. You would not like Ra when he is angry. Feeling betrayed, Ra sent his psychotic daughter Sekhmet in the form of a lion to clamp down on man’s rebellion. Similar to the storm troopers in Portland putting down protesters.

Sekhmet was really good at killing humans. Like eating peanuts, it was hard to stop once she got going. She was the COVID-19 of the 25th century B.C. She was so good at wiping out humankind that Ra became concerned that she might do in all of humanity. Ra was confronted with the existential question, “What good is being a god if all of your worshippers are dead?” This was a conundrum. Ra was upset that man had strayed from his straight and narrow. But it would be pretty boring being a God if there is no one to kiss your feet and offer up a human sacrifice to make sure the Nile flooded on time and the sun came up tomorrow.

Ra concluded he didn’t want all of humanity wiped out. So Ra ordered all the beer in Egypt to turn red. Ra had the red beer poured out all over Egypt. Sekhmet, in her killing rage, thought the red beer was blood. She tried to drink it all. She drank so much red beer she got drunk and passed out. The killing stopped. The Egyptians lived happily ever after, at least until the Arab Israeli war of 1967.

So what have we learned today? NASA has its version of the sun’s story. The ancient Egyptians have their version. Teach the controversy. Wear a mask. Wash your hands. Ra is watching. He may have sent the coronavirus with his vengeful daughter Sekhmet to get us.