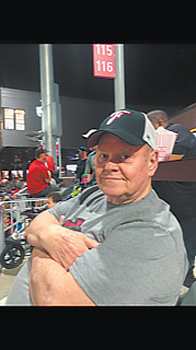 We seldom get to acknowledge a journalistic colleague that has come to mean so much to our organization and to the entire Fayetteville community. This is why we have chosen to recognize Jeff Thompson, a dedicated and talented news media professional whose journalistic talents and expertise have touched every aspect of the media industry. Truly, Jeff has forged his way through decades of an ever-changing media landscape, forcing him to recast and reinvent himself umpteen times to succeed in the highly competitive and cutthroat industry of radio news broadcasting. Fifty years! Jeff went from spinning records at Steve’s Tower in the Sky as a rock n roll disc jockey in the 70s to mastering almost every aspect of media. Radio, TV, and yes, in his later years, even daily and weekly newspapers.

Margaret Dickson, Up & Coming Weekly’s senior contributing writer and one of Jeff Thompson’s biggest fans has written a wonderful and heartfelt feature introducing our readers to Jeff and honoring him for his 50+ year career in the media industry. To infer that Jeff’s style of news reporting was “old school” would be an understatement compared to the coverage we have today. For decades, as WFNC’s news director, Jeff would tackle the most critical, spirited and controversial issues facing Fayetteville, Cumberland County and North Carolina. However, the difference between then and now was Jeff meticulously made sure the subject matter was covered fairly and accurately. If Jeff reported it, you could rest assured you had the whole story. This was Jeff Thompson’s legacy.

Full disclosure: The Up & Coming Weekly newspaper is celebrating its 25th year serving Fayetteville, Fort Bragg and Cumberland County. Our mission in January 1996 was the same as it is in 2020 — to showcase, accentuate and promote the assets and amenities that make the Fayetteville area a great place to live, work and play. In other words, if something was good for the Fayetteville community, we were going to support it, write about it and promote it. If something was not good for Fayetteville and we perceived it as detrimental to the community, we were going to take a stand against it. By 1998, our biweekly publication had been accepted and welcomed by the community, and it successfully took root — especially with the neglected cultural arts community. To this, the daily newspaper, The Fayetteville Observer, adamantly objected. Admittedly, as hard as I tried, I was no match for the multimillion-dollar publishing company and resolved that I was defeated.

So, in a final act of defiance, I contacted Jeff Thompson, who at the time was news director of WFNC — Fayetteville’s local and most trusted voice in news media — and Margaret Highsmith Dickson, who at the time was at the helm of the WFNC editorial board. The intrepid request I made to them when we met for lunch, and to which they reluctantly agreed, is why Up & Coming Weekly exists today.

I asked if I could appear exclusively on Thompson’s radio show the day we published an explanation as to why we were being forced out of business, along with an article on The Fayetteville Observer’s surreptitious tactics used to undermine our newspaper to eliminate competition and maintain its media monopoly — to the detriment of local businesses, organizations and community agencies. Jeff and Margaret allowed us to tell our story on the air to the adamant and arrogant denial of Fayetteville Observer management.

But it was too late. Jeff Thompson and WFNC’s local audience, at that time, was the heart and soul of the Fayetteville community. Despite The Fayetteville Observer denials, Fayetteville residents and businesses were aware of the tactics and knew the allegations had substance. The community rallied in support of our newspaper. Twenty-five years later, and without changing our mission or mandate, we are extremely proud to include both Jeff Thompson, as our senior news reporter, and Margaret Dickson, as our senior and longest-running contributing writer at over 19 years, as part of the Up & Coming Weekly family. Both have made significant contributions to the success of our organization.

Enjoy Margaret’s feature about Jeff Thompson, as she introduces you to one of her dearest friends and mentors. Continue to follow them both each week in Up & Coming Weekly. Neither has shown any sign of slowing down any time soon.
Thank you for reading Up & Coming Weekly. Please join our staff and me in congratulating Jeff Thompson for his first 50 years in media and his service to the Fayetteville community.