Peace in a storm 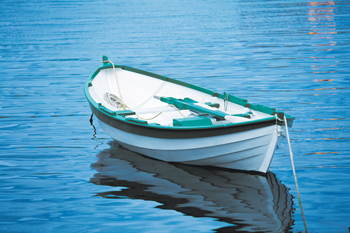 The little canoe my wife and I like to paddle across Hope Mills Lake is far from what I'd call a boat, a ship or anything else. I'm not a sailor. But in addition to the myriad shows I've watched, I have listened closely to the stories of those who set sail in larger craft on deeper waters.

Here's one thing I learned: On the surface, the winds can sweep across the sea at stunning speeds, bringing with them blowing rain, lightning, thunder and an ominous darkness. Waves can grow to 20 or 30 feet high.

During a storm like this, a ship can be tossed around like a toy boat. It’s not uncommon for an oceangoing craft to be lost in such storms.

But underneath the surface, just 100 feet down, there’s no storm. All is perfectly still. No sound. No tumult. Not even a ripple.

Let me take an intentional side journey and apply those verifiable facts to the people like you and me, caught in the tumultuous events that occurred (and are still occurring) in our city, nation and world.

If you observe closely, there is a clear view of those who react much like the surface of the water in an ocean storm. They're tossed around, at once gathered and scattered, dissipating their own strength as the wind of another change blows them where it will.

Then there are those who seem largely unaffected. Same sea, same storm, just more calm. The difference for those people is very much the same as the ocean — there's more depth.

My family has endured some ridiculously weighty circumstances in our short time on earth. Probably not unlike you, I expect. Maybe different storms, but we've all been tossed around in one way or another during our lives.

I've been surprised by the peace I had as we walked through some of the worst storms imaginable.

So let me share what I know about peace — it's tied to something Jesus said as recorded in John 14:27 “I am leaving you with a gift — peace of mind and heart. And the peace I give is a gift the world cannot give. So don’t be troubled or afraid.”

Author and apologist Ravi Zacharias tells of an Indian proverb that says, "whatever you are overflowing with will spill out when you're bumped. It has in mind, a village woman carrying a port or an urn of milk or water or something on her head. And it's right to the brim. And suddenly as some careless lad runs across her path and she stops for a moment and whatever is up to the brim there, begins to spill out.

"It is intended to convey what your real character is about. Whoever you are in your character, that characteristic will spill out when somebody annoys you or cuts into your path.”