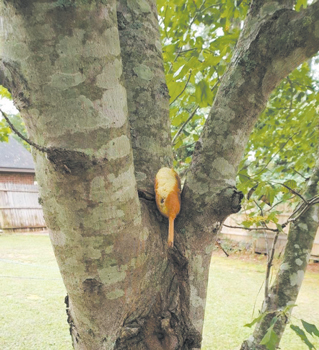 Do you believe in Corn Dogs in a young tree’s heart? Apologies to the Lovin’ Spoonful. The world is full of wonders if you know where to look. Many wise men have said this better. Yogi Berra said: “You can observe a lot by just watching.” The 18th Century English poet William Blake wrote, “To see the world in a grain of sand/And a Heaven in a wild flower; Hold infinity in the palm of your hand/And Eternity in an hour." The baseball player Satchel Paige opined: “Don’t look back. Something might be gaining on you.” Today’s stain on world literature will ponder what you can see if you stop watching Netflix to pay attention to the wide world around us.

A friend of mine who shall remain nameless (John Bantsolas) sent me a picture of a Corn Dog in a tree. Someone had sent the picture to him. John’s friend did not know how the Corn Dog got into the tree but he realized it was something special. He immortalized it with his handy smart phone. And now you, Gentle Reader, will also get to marvel at the spectacle of a Corn Dog sitting in a tree.

The Corn Dog in the tree raises more questions than it reveals answers. How did the Corn Dog get there in the first place? Can Corn Dogs climb trees? Did someone put it there? If so, why didn’t he finish eating it? Had the Corn Dog escaped from a county fair and run away to the country to socially distance from other Corn Dogs who might have The Rona? How long will the Corn Dog remain in the tree? Do the semi-eaten remains of a Corn Dog prove there some things that even Turkey Vultures won’t eat? Will it be there until the end of time? Had the Corn Dog been placed there by Ozymandias, the King of Kings of the desert? Did Ozzie put the Corn Dog in the tree and recite the words of Percy Shelley’s poem chanting: “Look on my Works, (My magnificent Corn Dog), ye Mighty and despair!” Did Ozzie think the Corn Dog would be an eternal monument to his greatness? Who knows? But we shall try to puzzle out why the Corn Dog was in the tree and what it may mean to we poor inhabitants of the ugly year 2020.

First a bit of Corn Dog history to set the stage. The origin of the species of Corn Dogs is shrouded in the mists of time and conflicting folk tales. According to legend, Corn Dogs originated millennia ago in the lonely plains of the Dakotas, when a native warrior stuck a deer sausage on a cat tail to cook it over an open fire. The warrior fell asleep and dropped the cat tail/sausage into a puddle. Upon hitting the water, the cat tail/sausage spontaneously generated and became the first Corn Dog. A phenomenon like when a horse hair falls into a puddle and morphs into a snake. The Corn Dog rolled away from the warrior’s camp into the night. Fun Fact: Corn Dogs do not have legs; they can only move by either rolling on the ground or curling up and stretching out like a Slinky. Once safely away, the Corn Dog reproduced itself into the millions of Corn Dogs that you can still see growing in gently undulating fields along the High Plains and Bad Lands of the Dakotas. Modern agricultural methods have revealed that annual crop rotation between Corn Dogs and Dental Floss will keep the land arable and the yield of both Corn Dogs and Dental Floss profitable.

As JFK said: “Victory has a thousand fathers, but defeat is an orphan.” This is evident with the many cooks claiming to have invented the Corn Dog. Boring tales of the origin of Corn Dogs from Mr. Wikipedia credit German sausage makers with inventing the stickless Corn Dog consisting of a sausage dipped in corn meal deep fried in oil. In 1926, Albert Barth marketed in his restaurant supply catalogue a “Krusty Korn Dog” baking machine. A U.S. patent was issued in 1927 for a “Combined Dipping, Cooking, and Article Holding Apparatus” for cooking this tasty snack. Carl & Neil Fletcher birthed Corn Dogs at the Texas State Fair in the late 1930s. Mr. Wikipedia says the “earliest known preparation of Corn Dogs was in 1937 during a high school baseball game in Iowa when the ballpark vendors ran out of hot dog buns in the third inning. Roger Newman took the remaining hot dogs and breaded them in cornmeal, which he had prepared for a fish fry.”

Another pretender claimed to invent Corn Dogs as the Pronto Pup at the Minnesota State Fair around 1941. A culinary genius at the Cozy Dog Drive-In claims credit for being the first to put Corn Dogs on a stick in 1946. The rest is Corn Dog history.

As Joyce Kilmer once almost wrote: “I think that I shall never see/A Corn Dog sitting in a tree/Corn Dogs are made by fools like me/But only Roger Newman can bread a hot dog.”

Pictured: The Corn Dog in the tree raises more questions than it reveals answers.