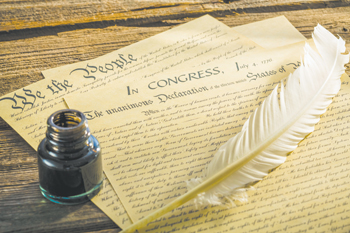 We are now on the threshold of another Civil War; one misfire, one wrong word, or a suspicious look can ignite a conflict. This is not the world I want my children or children's children to inherit. We have turned our backs on our integrity and humanity. Our Declaration of Independance recognized that the Creator gave us our liberty, but we have legislated it to the point that many want the document burned.

The Creator gave our Founding Fathers the Declaration of Independence and the Constitution to be this land's law. A few have used these documents to remove the Creator from our vocabulary. Removing the Creator from the foundation that America is built upon is now making her collapse. Today, we find our country divided like a torn-up photograph.

Our country is not moving towards a perfect union but destroying justice and hijacking domestic tranquility. Our justice system, which is supposed to be blind, is now making judgments based on the color of our skin and blurred by the colors of blue and red.

Our country is not providing a common defence, nor promoting the general welfare of the people. There is no safety or defence when thugs are allowed to kill, destroy and burn the blessings of liberty and the posterity that our brave military and people have fought for over the centuries.

Many leaders no longer lead by democracy but rule by the hegemony pack because they believe their ways are the best. All of this, while other Americans are quietly arming themselves, biting their tongues and clenching their fists readying for if the government cannot or will not govern.

Broken families, population issues, poor decisions, economic hardships, addictions and misguided road maps to success have confused our abilities to seek what is righteous and sound. We have let our feelings and emotions run our lives, and we mistake the feelings of happiness with satisfaction that joy brings.

Once the "right of the people peaceably to assemble, and to petition the Government for a redress of grievances," is no longer "peaceful," or done by "petition," it violates the law, and we are wrong for allowing and condoning it, no matter the issue.

Mayors and governors have handcuffed law enforcement officers who have sworn to protect us and sworn to enforce the rule of law. Many leaders have ordered their police to step away and watch while criminals assault, kill, rob, destroy property, and loot businesses. Worse, our police officers, politicians and citizens have been beat, spit on, sued, cancelled and killed by mob rule.

When those in power and who serve in high places view the world by race, ethnicity or political affiliation, they no longer serve "We the People" because their actions show us that they are the racist, the prejudice and the partisan political puppets. These actions manifest themselves by evil hearts and self-serving people who are destroying our way of life.

America has not hit perfection. We continue to struggle with that part of the Declaration of Independence that states that "All men are created equal, that they are endowed by their Creator." Yes, America does get sideways at times, but our system lets us try to correct wrongs.

Our Constitution gave us the greatest gift of all humanity. The ability to use our minds. The mind provides us with the wisdom to provide for our physiological needs — safety, belonging, self-esteem and the ability to achieve self-actualization and to improve our lives according to our abilities.

Unlike wars of the past, there will be no uniforms because there is no one side, no leaders, no geographical boundary because there is no end goal. We are faced with those who believe that education is more important than an honest day's work. Those who think that they deserve something that they have not worked for. There are those who think that invisible cash is better than real money. Some believe that a counter-revolution demanding a free ride is nobler than buying goods and services at the counter of a store.

For this, we compromise our self-accomplishments, our abilities for what is right, fruitful and honorable. We compromise our prosperity for those not willing to earn theirs. Politicians deceive us by making us believe that a strong government is better than a strong person.

We allow our pop-culture media to tell us what we should think instead of thinking for ourselves. We compromise not for man's good but to destroy our self-worth as we blindfold our own eyes and handcuff our own mind.

I ask you what is the price of war? Violence, destruction, starvation and disease? The first Civil War took one million people.

World War I was ignited over the assassination of one man. Nine million combatants and 13 million civilians died.

Furthermore, World War I brought an additional 500 million people who died from the 1918 influenza pandemic. Worldwide, this was about one-third of the world's population.
World War II had approximately 85 million fatalities. Tens of millions of people died during the conflict due to genocides — including the Holocaust, starvation, massacres and disease.

In 1994, the president of Rwanda was assassinated, and unrest occurred. The United Nations pulled its peacekeepers out (the same as un-funding the police), and genocide followed, killing about 850,000 souls.

History has shown us that once the law is gone, the justice system fails, the economy collapses and the food supply chain is broken, war, both urban and countryside, will follow.

I do not want another war, another wasteland, another lost generation in my lifetime. I do not want us to repeat the horrors of our past. For those that do want war, who are you willing to sacrifice, bury and starve for these things?

I believe restoring order in our land is our fastest way to peace. The government at all levels must restore law and order because they are the only ones with the capacity and means to do so. Yes, people are wrongfully killed every day, and those who commit a criminal act should be brought to justice.

But we also have many more good people, good citizens, who are willing to help those less fortunate. But they do so because they want to help, not by force or wealth redistribution but because they find joy in doing so.

We must ensure that everyone has the right to "Life, Liberty and the pursuit of Happiness." We must be reminded that happiness is a pursuit and not a right in itself. We should remember to respect one another as ourselves for harmony and peace of the land. It would be good for us to remember to practice mercy, forgiveness and love, which are the virtues we desperately need. However, we must remind ourselves that for those who cannot abide by the rules of the land, that justice must be served.

I pray that my children and my children's children never see a war on our homeland. I pray for a country abundant with beauty, opportunity and peace, for this is their inheritance.