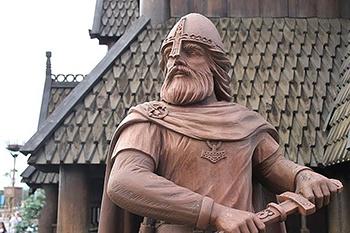 What's in a name? Would a Viking by any other name smell as sweet? This is the musical question America is asking itself right now. Well lucky you, my two gentle readers, today's assault on world literature will answer that question as we look at my favorite Viking, the inimitable Ivar the Boneless. What? You say you have never heard of Ivar the Boneless? For shame. Allow me to correct that gap in your knowledge of Norsemen.

Ivar was a real person. His full name was Ivar Ragnarsson, but his buddies called him Ivar the Boneless. He strode the Earth in the middle of the 9th Century, raising heck wherever he went. His daddy was King Ragnar Lodbrok. Like many Kings, Ragnar had issues. On Ragnar's wedding night, his bride Aslaug told him that their son would be born boneless unless he waited three nights to consummate their marriage. Ragnar, being hot to trot, chose not to wait.

Living up to Asluag's prophecy, legend says Ivar was born without bones. Scientists guess that Ivar might have had osteogenesis imperfecta, a terrible condition of brittle bones that break frequently. Some Norse experts think that Ivar's nickname was a Viking joke. They propose that Ivar was actually a giant. His buddies called him Boneless like calling a 300-pound man "Tiny." The actual truth is lost in the fog of time. In any event, history has called him Ivar the Boneless forevermore.

Ivar's daddy, King Ragnar, came to a bad end. After losing a battle to King Aella of North Umbria, Ragnar got tossed into a pit of poisonous snakes, dying a venomous death. His death did not sit well with Ivar and his brothers, who then invaded Britain to kick some Northumbrian backside in 865 A.D.

As the story goes, Ivar the Boneless was carried into battles on a shield smiting his enemies with his sword or piercing them with arrows from his longbow. After winning a battle, Viking warlords enjoyed being carried around on the shields of the defeated enemy just to rub it in. The same phenomenon occurred when Tar Heel fans went to Franklin Street to celebrate the recent defeat of Dook at Coach K's last home game and beatification. That loss caused Coach K to emulate Lesley Gore's great song, "It's my party, and I'll cry if I want to." But I digress, back to Ivar.

Ivar was a wild man in battle. He got to be known as a Berserker. Berserkers were Viking warriors who went absolutely bananas when the blood lust was lusting. Historians say the term came from the Vikings' habit of wearing a bearskin into battle. "Ber" means bear, and "Serker" means coat in Viking talk. Watch out; you just learned something new that was old. After Ivar whipped King Aella in battle, he subjected him to a gooey and painful death called the "blood eagle." As this is a family newspaper, I shall spare you the gruesome details of the "blood eagle," but you can look it up on Mr. Google if you are curious. Ivar apparently died about 873 A.D. of a "sudden and horrible disease," according to Irish records. An English researcher claims that the bones of a nine-foot-tall Viking found in Ireland might be the remains of Ivar. If Ivar were nine feet tall, that could explain his silly nickname. At this point, we say goodbye to Ivar but continue to consider some colorful Viking names.

The Vikings' twisted sense of humor shows up in many of their names. When they weren't robbing monasteries or despoiling virgins, Vikings spent a lot of time like the former guy making up nicknames. Shakespeare may have stolen his lines from Ivar's berserking band of brothers when he had Henry V say: "We few, we happy few, we band of brothers/ For he today that sheds his blood with me/ Shall be my brother; be he ne'er so vile."

Ponder the names of Ivar's buddies: Eric Bloodaxe, Gunnstein Berserk-Killer, Olaf the Witch Breaker, Harald Wartooth, Thoriir the Troll Buster, Sigurd Snake in the Eye, Sweyn Forkbeard, Asbjorn Muscle of Orastead, Hilf the Castrator of Horses, Sigurd the Stout, Ljot the Unwashed, Tryggvi the Pretender and last but not least Eystein Foul-Fart. Who would want to meet any of this vile group in hand-to-hand combat?

Being duly sensitive to today's current woke culture, one can only imagine the humiliation and smell shaming visited upon poor old Eystein Foul-Fart. Eystein was probably suffering from some gastrointestinal disorder that caused him to become socially isolated and sustain great mental anguish. The sorrow and the pity. I can only liken his suffering to that of a worker named Leon. I was once in a restaurant restroom and noticed a defacing of the sign that says, "Employees must wash their hands after every visit."

Some insensitive lout had singled out poor Leon on said sign. The lout had written in ink below the printed "Employees must wash their hands" "Especially Leon."

Eystein and Leon were brothers who suffered the slings and arrows of outrageous fortune. The horror. The horror. Can't we all just get along?