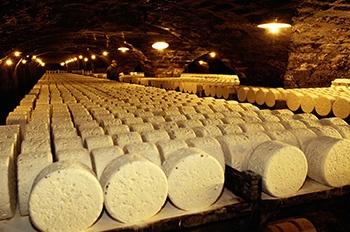 Today we shall stare into the void. Trigger warning: Before you read any further, remember what our pal Nietzsche said, “If you gaze into the abyss, the abyss gazes also into you.”

Let us carefully descend into the wonderful world of caves. To quote the world’s most famous rooster Foghorn Leghorn, “I say boy, holes in the ground, my boy, holes in the ground.” Today we shall spelunk into what lies beneath. The abysses into which we shall exchange furtive but tasty glances are the fabled Cheese Caves of Springfield, Missouri. What? You have never heard of the famous Cheese Caves of Missouri? Pull up an ottoman and have a seat. Today will be a learning experience. Kindly bear with me; we will get to the Cheese Caves, but first, a brief survey of two other world-famous caves.

Among the most famous group of caves is the Lascaux cave complex in France. These caves feature about 1500 wall paintings done roughly 17,000 years ago by paleolithic cave dudes and cave dudettes. According to Mr. Google, the wall paintings show people, animals and mysterious abstract drawings.

The caves remained undiscovered until 1940, when a teenager was walking his dog. His dog Robot managed to fall into a hole that turned out to be the entrance to the Lascaux caves. If not for Robot’s fortuitous clumsiness, Lascaux might have remained hidden for another 17,000 years. Who’s a good boy? Robot’s a good boy.

A most excellent cave story was in the “Andy Griffith Show,” where Andy and Helen get temporarily stuck in a cave. Barney is not a fan of caves or bats. He tells Thelma Lou why going into caves is a bad idea.

Barney: “You know what you find in caves? Bats. That’s right — bats. You know what they do? They fly into your hair and get tangled up in there and lay their eggs, and you go crazy.”

I agree with Barney. Even if I had hair, I would not want a head full of bat eggs. However, if you choose to have bat eggs in your hair, that is no one’s business but your own. I will not think less of anyone sporting bat eggs in their hair.

Now let us return to the Cheese Caves. America may not have baby formula, enough gas to go around or flying cars, but we have a Strategic Cheese Reserve buried in Missouri. According to no less an authority than The Washington Post, the U.S. government has 1.4 billion pounds of cheese stored underground in various Cheese Caves. The Feds began buying and storing cheese during President Carter’s time to help dairy farmers sell their products. Cheese is easier to store and keeps much longer than milk. The Feds would buy all the cheese dairy farmers could produce. Naturally, the farmers kept producing more and more cheese. Pretty soon, this added up to a lot of cheese. When Reagan became President, he gave out 30 million pounds of government cheese to the hungry masses. Some of you who are a bit long in the tooth may recall the government cheese program. If you can remember this, please don’t drive after dark.

Here are some cheese facts which might help you forget your inability to tour the Cheese Caves for a personal look. The federal government reports that 36% of Americans are lactose intolerant. Demographically 75% of African Americans, 51% of Latinos, 80% of Asian Americans and 21% of Caucasians are lactose intolerant. The Cheese Council reports that processed cheese was originally made for wartime use as it can last almost as long as a Twinkie. Pilgrims brought over cheese on the Mayflower. The first cheese factory did not manufacture cheese until 1851. One-third of all milk in the United States is made into cheese. The average American eats 23 pounds of cheese a year. The most popular cheese recipe in the United States is macaroni and cheese.

I am proud to have gotten through this column without a bunch of gratuitous cheesy puns. There were some Gouda ones I discarded. It could have been a Feta accompli to have riddled this column with bad puns like an overripe Swiss Cheese. But then the column would have smelled like a sweating Limburger cheese on a 100 degree-day. No dogs named Robot were injured during the writing of this column. As Mr. Spock would say,

To quote Elvis, “I’ll have a Blue Christmas, but you can have a Bleu Cheese.” The Cheese stands alone. Got Cholesterol?