Your job isn't so bad 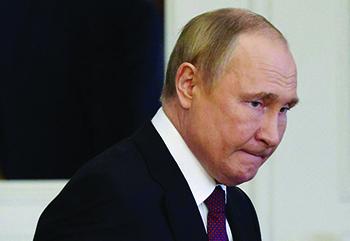 Trigger alert: If the bodily functions of Vladimir Putin offend you, stop reading now. Go to the cross-word puzzle.

Today's lesson is ripped from the pages of the British newspaper The Daily Mail. This column is a tale told by an idiot (your humble author), full of sound and fury, signifying nothing — potty humor at its worst.

We are traveling to the Island of Misfit Toys. Beware, this way lies madness. That's right, friends and neighbors, we are entering the bizarre world of safeguarding Putin's Poo.

As you may recall, Vlad Putin has been the dictator of Russia since 2000. He came into office during Bill Clinton's second term and outlasted Bush Jr., Obama, Trump and now Biden. Over time, paranoia can occur in even the best of dictators, not to mention the worst ones.

Many rumors are floating around about Vlad's health. Does he have cancer, Parkinson's Disease, early-stage dementia or boogie-woogie fever? The speculation is endless. Vlad denies ill health. However, his myriad enemies want to know if he is about to croak.

Vlad's health is a closely guarded state secret. In 2001 George W. Bush said about Vlad: "I looked the man in the eye. I was able to get a sense of his soul." Unfortunately, sensing Vlad's soul by looking dreamily into his eyes did not work out so well. Looking elsewhere on Vlad might give a better sense of his soul, or at least his health.

Enter Putin's Poo Patrol to safeguard all the clues that may be secreted deep in Putin's Poo. If the eyes are a window to the soul, Putin lacking a soul negates retina gazing. The Daily Mail's article about Putin's bodyguard unit tasked with collecting the Presidential Poo is instructive.

Vlad wants to keep Western eyes from nosing around to see what is happening in his lower digestive tract. Analyzing his poo is probably more effective in determining his health than Bush's romancing Putin's baby blue eyes.

The Poo Patrol has the delicate task of collecting Putin's bodily waste when he is on foreign trips. They store it in baggies, put it in a special briefcase, and guard it until it is safely back in Mother Russia.

The Daily Mail reported Vlad brings his own private porta-potty, or his bodyguards accompany him to the bathroom with a special pooper scooper to secure Vlad's business from foreign toilets. The story was accompanied by a video of six burly security men who accompanied Vlad in Paris to the toilet along with the mysterious briefcase full of you know what.

What do they do with the Presidential Poo once they get it back to Russia? Is it embalmed and enshrined in Moscow in Lenin's Tomb? Are Russians making Non-Fungible Tokens out of pictures of the poo to sell on the interwebs to support the war against Ukraine? Does Putin have a Presidential library where children can come and admire the Presidential Poo? Can you buy plastic replicas of the poo at the Library's gift shop? Inquiring minds want to know.

Putin's Potty Patrol is not without historical precedent. English King Henry VIII had an individual to fill the lofty office of the Groom of the Stool. The Groom of the Stool's job was assisting the King in evacuating his bowels and taking care of any clean-up tasks that might arise as a result. The Groom would be responsible for ensuring a portable toilet was available to the King as needed, along with fresh towels and water.

Over the years, as a result of this intimate daily contact with the King, the job of Groom of the Stool evolved into the Groom serving as a close advisor to the King.

The Groom lived in the castles and received many perks due to his proximity to the King. The Groom was well paid for what some might consider the Ralph Norton of Royal Jobs. Over the years, the status of the Groom grew in prestige and power. Mr. Google says that King George III had nine different Grooms during his reign, one of whom, John Stuart, became Prime Minister of Great Britain.

So, what have we learned today? Finally, something useful. Don't turn your nose up at dirty jobs. There can be upward mobility in a downward-facing job.

You can start at the bottom and work your way up to being Prime Minister. In Putin's Poo Patrol case, doing an excellent job as a Poo Agent might keep you from being sent to Siberia or having a cup of Polonium Tea.
Always do your best.