Ghost banking in the sky 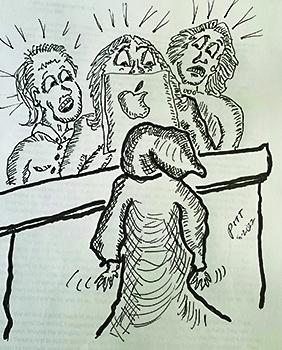 Are you ready to imitate Jim Morrison and break on through to the other side? Ever wonder what awaits outside this vale of tears? You are on the road to find out.

John Lennon wrote a delightful little ditty called “She Said, She Said” containing the cheerful line: “I know what it’s like to be dead.”
A Russian proverb says: “If you wake up and you are not in pain, you know you are dead.”

Today we consider my recent near-death experience at the hands of a local financial institution. Come along and muse on the semi-finality of Mr. Death.
It was a sultry day. The heat index was waxing in the triple digits. It was also time to make a bank deposit. The lobby was cool and clear. All seemed merry and bright. Due to some bizarre corporate decree, the bank no longer used deposit slips. You walk up to the teller to present a bank statement and a check. Usually after consulting the computer, the nice lady takes your money. But not today, Bucko.

I had been using the bank for years without incident. This day was different. I presented my check. The teller began hitting computer keys when suddenly a strange expression clouded her face. She asked me my address. I knew it. She asked me for the last four digits of my social security number. I knew that, too. So far so good.

Her expression became colder. She called another teller to look at her computer screen. Teller #2’s wide smile suddenly morphed into anxiety touched with a tinge of fear. Uh oh. “This cannot be good”, thought I. No explanation was forthcoming.

Teller #2 then retrieved a bank manager to come over to ponder the screen. The manager’s face changed from a happy Chamber of Commerce “glad to meet you, look” to “holy mackerel, what fresh hell is this?” look as she perused the screen.

I still had received no explanation for what was happening during the usual mundane task of giving someone my money.
Suddenly, scenarios like sugar plums began to dance in my head. Had someone erroneously deposited $1 million into my account? Had an identity thief absconded with the balance? Had the IRS issued a double secret levy and emptied my account?
I verbally suggested all three possibilities to the trio of bankers silently frowning at the computer screen.

To misquote Julie Andrews in “Camelot”: “The silence at last was broken/ The Bank flung wide its prison doors.”
Finally, bank manager said: “According to the computer you are dead. You died in 2006.”

This was news to me. Of course, the decedent is usually the last one to know. No one had bothered to tell me I was dead.
I leapt at the chance to finally quote Mark Twain who had a similar experience of being erroneously reported as dead, I replied: “Like Mark Twain, reports of my death have been greatly exaggerated.”
The manager’s explanation was that someone had mistakenly hit the bank’s death key back in 2006, but no one had noticed it until now — August 2022.

I felt some kinship to dead people in Chicago. I had been voting in many elections since 2006 despite being dead. It was a good feeling. My widow Lani had not remarried in the 16 years that I had been dead. She must really love me. My dogs still treated me as if I was alive. That was a plus.

We all had a good laugh at my return from the land of the dead to the material world. Then wanting to spoil the mood, I suggested darkly that like in the movie “Sixth Sense” perhaps they saw dead people.
Maybe the computer was right and I really was dead. Their laughter developed a nervous tinge. I threatened to come back from the dead to haunt them if they didn’t fix their computer.

They promised to tell their computer that like sweet Molly Malone in Dublin’s fair city who cried: “Cockles and Mussels that I was alive, alive, Oh!”
We parted strangers, thoughtless and free. They went back to banking. I went back to doing whatever ghosts do when they are not making bank deposits. I walked out through a wall, because as you know, ghosts don’t need doors.

Post script: In my incorporeal ghostly form I went to pet poor Freya the 1300-pound walrus who had been entertaining people in Oslo, Norway, this summer.
Freya had been climbing on fishing boats in the town harbor to sun herself.

Like the moron tourists in Yellowstone who get too close to buffaloes, the moron contingent in Oslo kept getting too close to Freya who could have done them serious bodily harm.
The Norway Fisheries Directory decided in order to save the morons from themselves, that Freya had to be killed. She was dispatched by government decree.

I asked Freya about this turn of events. She looked at me with very large sad walrus eyes and said “All I wanted was some herring and a place to sun myself.”
Rest in peace, Freya. We’ll meet again. Don’t know where. Don’t know when.