Marduk and cover: Do something about climate change 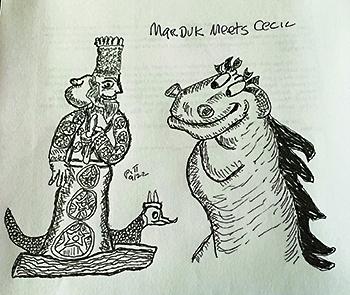 Once upon a time there was a Babylonian god named Marduk. Not Daffy Duck, not Donald Duck, but Marduk. You don’t need a Mesopotamian god to know which way the wind blows. Climate change, who needs it? It’s fake news. When a talking head on cable says it’s fake news, I believe it, and that settles it. Remember the complaint: Everybody talks about the weather, but nobody does anything about it? Well, here is something you can do about it. It’s time for you to get some of that old time religion. Climb on Mr. Peabody’s Time Machine to return to ancient Mesopotamia.

Today we visit Marduk, the Babylonian King of the Gods. Marduk first showed up in the 18th Century B.C. For the mathematically challenged, that is about 4000 years ago. In addition to having a really cool name, Marduk was in charge of bad weather. More on this later.

When Willard Scott, with or without his toupee, was in charge of making the Earth’s weather on the “Today Show,” we never had all this bizarre weather. There were four seasons, neatly stacked on top of each other. We knew what to expect and when. Now things are messed up.
Current TV weather persons delight in regaling us with stories of floods, heat waves, giant wild fires, drought, melting ice caps, rising sea levels and mafia murder victims popping up on the shores of shrinking Lake Mead. Forget all that stuff. It’s not really happening. Who are you gonna believe? Me or your lying eyes?

Now, back to Marduk and his impact on the weather. Many moons ago in the Euphrates valley there were two gods, Ea and Enlil. Ea was Marduk’s daddy. Ea ciphered that Marduk was a better god than he was. Ea cheerfully handed his crown to Marduk, putting him in charge of humanity. Enlil faded into obscurity as Marduk’s star rose during the reign of King Nebuchadnezzar.

The Mesopotamian gods were always having a ruckus among themselves as to who would get to be Boss God. Rodney King would have been greatly disappointed in them, as they just could not get along. Marduk was young and studly. He volunteered to lead his team of gods against the other team. If Marduk whupped the other team of gods, he would be promoted to NCAA Champion Head Mesopotamian God.
To get ready for the Royal Rumpus, Marduk rosined up his bow, made a bunch of arrows, collected a passel of lightning bolts, and ate a Thai salad that turned his body into flame.

Culinary Aside: Thai salads have been famous for being peppery hot for over 4000 years.
The leader of the other gods was an ocean-going lady dragon named Tiamat. Tiamat was a mean critter, not like Beany’s friend, Cecil the Sea Sick Sea Serpent. Oh no, Tiamat, like Shaft, was one bad ... (shut your mouth).

Marduk's battle plan used strategery. To catch Tiamat, Marduk made a giant net to trap her. He made the four winds blow Tiamat into his net. To keep her in the net, Marduk invented seven brand new really ugly winds which included his Super-Duper Wind — the Rain-Flood. He charged into battle riding his chariot on the Rain-Flood (which we now call hurricanes) pulled by four evil horses who had mouthfuls of poison. Marduk did not mess around. He caught Tiamat in his net and proceeded to kill her with an arrow to the belly.

Next up, like Sherman on his march to the sea, Marduk killed Kingu, Tiamat’s top general. Kingu had been wearing the “Tablets of Destiny” which Marduk liberated from him to wear like a championship belt from the WWF. Undefeated, Marduk gets to be Boss God.

After his glorious victory, Marduk settled into a life of ease drinking Bloody Marys by the cement pond. He created humans to do all the work so the gods could just lay around the shack waiting for the mail train to come back. To keep himself amused, Marduk had his own pet dragon named Mushussu. Four millennia later, Mushussu was the inspiration for Falkor the fuzzy dragon in the movie “Never Ending Story.”
So, how does this mishmash of a column tie together? Frankly, not very well. But here is the point, such that it is. If you don’t believe in climate change, don’t want to do anything about climate change, and are sick of hearing about climate change; then start imploring Marduk to intervene and fix the weather. Praying to Marduk to calm weather events might not work, but it’s better than doing nothing. Besides, saying Marduk out loud is fun. Imagine if when Goober imitated Cary Grant he had said: “Marduk, Marduk, Marduk”, instead of “Judy, Judy, Judy.” Say Marduk loud and there’s music playing. Say Marduk soft and its almost like praying. Try it.

You’ll be glad you did.
No Babylonian gods, sea serpents or Mesopotamians were harmed during the writing of this column.