Days of swine and roses 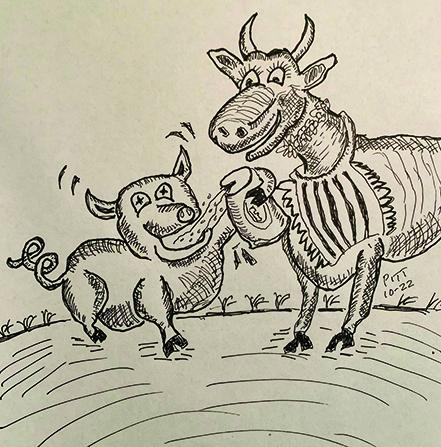 Once upon a time in the far away country of Australia there lived a fine young feral pig named Swino. Swino, as a piglet, was filled with curiosity and promise. The oldest of his litter of six, Swino was a natural leader.

His mother Matilda, the Waltz Queen, knew he was special. All the neighborhood pigs believed Swino would be a pig of prominence and distinction when he was grown. Do you know what a pack of feral pigs is called? It’s a called a sounder. Now you know. You can stop reading this column as no other useful information will be imparted hereafter. I will give you a moment to turn the page to the cross-word puzzle.

Now, for the two of you still reading, listen my children and you shall hear of the midnight raid of Swino and shed a tear. Swino’s twisted tale is not an uplifting Horatio Alger story of a poor but plucky lad overcoming an impoverished childhood. Nay, a thousand times, nay. This is a sad story of an exemplary feral piglet who had the advantages of a good family, a supportive sounder, and an excellent education who came to rack and ruin due to Demon Alcohol.

At Perth he met the love of his life, Petunia Pig, a wealthy debutante whose family had the largest Vegemite factory in Australia. For those of you fortunate to have never encountered Vegemite, it is a vile dark brown paste made mostly of leftover brewer’s yeast, snips, snails and puppy dog tails. For reasons unknown, Australians enjoy smearing Vegemite on toast and then consuming the hideous result. It was love at first sight for Swino when he first laid eyes on Petunia. There could be no other love for Swino but Petunia. Unfortunately for Swino, as a result of Petunia’s wealth and beauty, there were many other suitors for Petunia’s trotter.

A veritable pack of wealthy famous pigs sought to marry Petunia. Her suitors included the Practical Pig from the Three Little Pigs, Porky Pig of Looney Tunes, Man-Bear Pig from South Park, and Snow Ball from Animal Farm. Petunia even had a brief experimental fling with Miss Piggy. Ultimately to the eternal heartbreak of Swino, Petunia married Arnold Ziffel the Pig. She moved to America to live
on a farm near Hooterville with Arnold, Oliver and Lisa Douglas, Mr. Haney and Sam Drucker.

As Petunia sailed away to her new life in America, Swino turned to drink. His consumption of alcohol made Edgar Allen Poe, F. Scott Fitzgerald and Ernest Hemingway look like teetotalers. Here is where our story turns true as reported by Doug Williams in the Outdoor Revival newspaper of 24 April 2019. Doug wrote the greatest headline ever written. Mr. Williams wrote: “Pig Steals Campers’ Beer, Gets Drunk & Starts Fight with Cow.” The beauty of this headline makes me cry every time I read it.

A group of campers were in the Australian outback. After a night of carousing, they left their beer out. In the middle of the night they were awakened to the sound of a feral pig rooting around, chomping the beer cans, and drinking the beer. The report says the pig (who we later learned was Swino) drank 18 cans of beer.

Soused on these adult beverages, Swino got into a ruckus with his erstwhile friend, Elsie the cow. Whatever Swino said to her led to Elsie chasing him around the camp. Some pigs, like some people just can’t hold their liquor. After the fight with the cow, Swino swam across a nearby river and passed out under a tree to sleep it off.

Here comes the weepy part of the story. Swino woke up with a terrible hangover. He wobbled across the highway looking for either an Alka Seltzer or hair of the dog that bit him to ease his aching head.

Unfortunately, he was still drunk. He did not notice the truck coming down the road. Splat! Swino was no more.

It is unclear if Petunia attended his funeral. The campers reported despite their sadness at Swino’s unexpected demise, that the barbecue served at his wake was excellent.