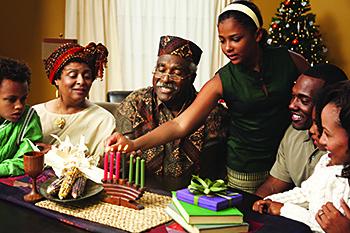 As decorations rapidly move from grinning jack-o’-lanterns and jolly, top-hatted turkeys to jingle bells and evergreens — the countdown to Christmas seems to start just a little bit earlier each year. The yuletide frenzy picks up sometime in mid-October, and after Halloween, the calendar is a riot of red and green ribbons until the New Year.

Despite its total domination of the solstice season, it’s important to remember that Christmas isn’t the only celebration on the agenda during this time of glad tidings and good cheer. From November to January, there are an astonishing number of holidays that hold religious and cultural significance for families worldwide.

Hanukkah, Yule, Diwali, Chinese New Year, St. Lucia Day, and so many others make for an exciting holiday season for many people in the United States and abroad.
While many of these holidays — Christmas included — boast origins from other countries and cultures, one winter holiday, in particular, is uniquely and singularly American in its creation: Kwanzaa.

Kwanzaa is an annual holiday that celebrates African-American and Pan-African culture. Created in 1966 by professor Dr. Maulana Karenga, Kwanzaa began as an effort to bring cultural identity and a celebration of African American history to the black community.

In response to the shocking violence of the 1965 Watts Riots in Los Angeles, California, Karenga, a prominent figure in the Black Power movement, wanted to offer Black Americans a holiday rooted in the festival traditions of West and Southeast Africa as a way to claim a heritage and traditions lost during American slavery.
A derivation of the Swahili phrase matunda ya kwanza, Kwanzaa, styled with an additional “a” to make it seven letters long, means “first fruits.” The non-religious, seven-day holiday is celebrated from Dec. 26 to Jan. 1 each year.

Kwanzaa is a strictly cultural practice and in no way seeks to replace Christmas, though it is generally practiced in conjunction with the holiday.
During Kwanzaa, traditionally, families decorate their homes with the symbols of the holiday. The tradition of Kwanzaa is based on a variety of practices and may look very different from home to home. Still, it is understood as a celebration of family, life, culture, and community, as well as a recommitment to the “Nguzo Saba,” which are the “seven principles” at the core of the holiday.

Perhaps Kwanzaa’a most widely recognized symbol is the kinara. This seven-branched candelabra holds the Mishumaa Saba, seven candles of red, black and green — the colors of the Pan-African flag. Each candle in the kinara represents one of the seven principles of Kwanzaa, and one is lit each day. The kinara’s black center candle —the unity candle, is lit first, then lighting proceeds from left to right to encourage thoughtful consideration and discussion of each principle throughout the holiday.

In addition to the kinara, other major symbols of the holiday include:

During the seven days of Kwanzaa, families will celebrate through feasting, dancing, drumming, and enjoying time together.
Children represent a major aspect of Kwanzaa as they represent the future. Elders in the community and in the home also hold a place of honor during the season to show respect to the ones who came before.

Though it has roots in separatist ideology, over time, Kwanzaa has come to represent the importance of culture and identity within the Black community. Parallel to those aims is a desire within the community to understand the origin, customs, and history of Black people outside the complicated framework of slavery. Despite being seen as a closed practice during its highest point of popularity in the 70s, Kwanzaa is now embraced by people of many ethnicities and races who seek to refocus their values ahead of the new year.

Although not as widely practiced as it once might have been, Kwanzaa is an excellent example of how powerful the need for tradition can be. The practices that govern our most cherished memories provide a solid foundation on which to build, grow and share.

The late poet Maya Angelou, a noted lover of the holiday said this of Kwanzaa: “It is a time when we gather in the spirit of family and community, to celebrate life, love, unity and hope.”