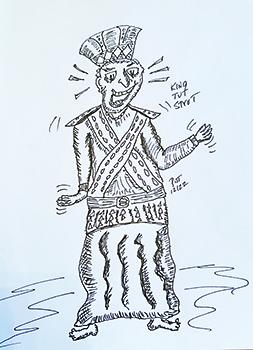 Howdy boys and girls, here’s the annual New Year’s salute to what was doing 100 years ago. After some high level cyphering, it turns out 1923 is the year that turns 100 in 2023. A decade here, a decade there, and pretty soon it adds up to some real time. Grab a cup of your favorite caffeinated beverage, put on your thinking cap, and hop into Mr. Peabody’s Way Back Machine to relive the thrills of 1923.

On 1 January 1923, the Union of Soviet Socialist Republics was established under the old Soviet calendar. The USSR died on 26 December 1991 at the age of 68 due to sclerosis. It was replaced by Russia which may suffer the same fate this time due to chronic corruption. January 13 saw Hitler stir up a riot of 5,000 storm troopers to protest everything. This would not be the last the world saw of Hitler. Over in Italy, Mussolini formed the Fascists Voluntary Militia on February 1. The ferment of World War 2 was starting to bubble.

On February 16, British archeologist Howard Carter opened the burial chamber of Pharaoh Tutankhamun. King Tut had been peacefully dead for about 3,000 years until Howie woke him up. Like most people rudely awakened from sleep, King Tut was cranky at being disturbed. You would not like King Tut when he was angry, and he was plenty angry. Nine people who were involved in disturbing Tut died mysterious deaths. Some good things did result. Steve Martin became famous for doing the King Tut Strut on "Saturday Night Live." Who can ever forget the immortal lyrics: “Born in Arizona/ Moved to Babylonia/ Dancin’ by the Nile/ Ladies love his style/ Rockin’ for a mile/ He ate a crocodile/ King Tut.”

Boris Karloff’s career soared after playing Imhotep the mummy in the 1932 movie "The Mummy." Multiple mummy movies have stalked the silver screen since then. The actor Billy Mumy owes his name and success to King Tut. Mr. Mumy appeared in "Lost in Space" and the "Twilight Zone" episode in which he plays an evil child with psychic powers. His most dramatic role was in the short musical film "Fish Heads" which stars singing fish heads. Go look "Fish Heads" up on Mr. Google. You’ll be glad you did.

On February 22 the first successful chinchilla farm was founded in California. People of a certain vintage may remember when chinchilla coats were the rage.
On the entertainment front, the hit song “Yes, We have no Bananas” appeared on March 23. On June 6, Albert Anastasia was sentenced to two years in prison. Al was not someone to let time in the slammer get him down. Al went on to be one of the founding fathers of the American Mafia, the Boss of Murder Inc, and head of the Gambino Crime Family. Sadly, Al later died of lead poisoning in October 1957 while sitting in a barber chair in New York City.

Harry Houdini astounded New Yorkers on June 12 when he escaped from a strait jacket while hanging upside down forty feet above the ground. Why anyone would want to hang upside down in a strait jacket remains one of the many mysteries surrounding Houdini’s life. The comic strip "Moon Mullins" debuted on 19 June and ran until 1991 lasting almost as long as the USSR.

On July 13, paleontologist Roy Chapman Andrews found the first fossilized dinosaur eggs while digging in Mongolia. It is unclear if the eggs were poached, sunny side up or scrambled.
Warren G. Harding, the 29th President, died mysteriously in a hotel room in San Francisco on August 3 making Cal Coolidge the 30th President. Silent Cal didn’t say much, but is remembered for saying “The business of America is business” whatever that means.

On September 5, a boxing miracle occurred when two fly weight boxers, Gene LaRue and Kid Pancho knocked each other out simultaneously. That was an athletic feat unlikely to be repeated. In September, Lou Gehrig playing for the NY Yankees got his first hit. He went on to get a total of 2,721 hits,493 home runs with a life time batting average of .340. Pretty darned impressive.
In Germany, the Mark continued its downward spiral, reaching a conversion rate of 4 billion Marks to a dollar on 11 October. The Disney Brothers founded their studio on 16 October. Disney thinks kids grow up too fast, but capitalizes on it by charging full adult admission at its theme parks for any kid over the age of 9.

On 16 October John Harwood patented the first self-winding watch for people too lazy to wind their watch. This ultimately ruined the old saying about learning something dumb: “I did not know whether to go blind or wind my watch.”

On November 8, Adolph Hitler surfaced like pond scum with the Beer Hall Putsch in another failed attempt to take over the German government.

So, there you have it. Our old pal 1923 turns 100 this year. He doesn’t look a day over 75. Must be the curse of King Tut is finally wearing off. Happy New Year to us each and every one.