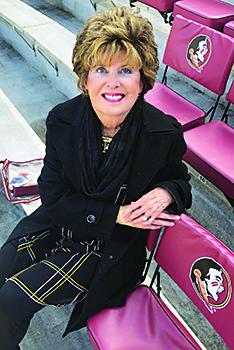 My dear friend Joy Cogswell has passed but leaves a legacy of extreme devotion to God, her family and her music. Bill Kirby of CityView Today has known Joy for decades. You will find his wonderful heartfelt perspective on Joy on page 10. His article first appeared online Jan. 3. What follows is my perspective.

Joy, a stunningly beautiful woman with exceptional God-given musical talent, touched and influenced thousands of lives during her 45-year career at Snyder Memorial Baptist Church. The Bowman family represents three of those lives.

In 2002, Joy became Snyder’s Music Director and head of the Snyder Music Academy. Even though she worked with many adults, it is incalculable how many young people owe their musical careers and success to her, too. I first met Joy at Methodist University in 1986 when we took our son Grady, then four years old, and enrolled him in her Kindermusik class. She was terrific at working with young children. She transformed the entire room into a symphony of love and patience as she gently transferred her passion for God and music in a way that would change their lives. We have always credited Joy’s influence on Grady as the genesis of his successful musical and theatrical career. A career that has carried him to Broadway and around the world, singing and dancing with Joy’s same enthusiastic penchant for dedication and creativity. She was the Musical Godmother of all her students and loved following their careers and celebrating their successes.

After Grady graduated from Kindermusik I had little contact with Joy until I started Up & Coming Weekly in 1996. By this time, her reputation as a highly gifted pianist was commonplace, nearing celebrity status. That year she recorded and released her music on several cassette tapes that I willingly helped her market and promoted during the Fayetteville Junior Leagues' Christmas Holly Day Fair. Several years later, as Director of the Synder Music Academy, we discussed how unfortunate it was that the children she taught had few opportunities to showcase their talents. So, together we created a youth ensemble with a singing, dancing, and educational mission called: The Kidsville Kids! These young people and Kidsville’s Truman the Dragon became ambassadors for our literacy and educational resource, Kidsville News! We publish and provide Kidsville News! free of charge to Cumberland County and Fort Bragg teachers, parents and children K-5th grades. For years, this enthusiastic troupe sang and danced their way into the hearts of children and adults, promoting reading, education, and fun-healthy lifestyles. Joy was on the board and past president of the nonprofit Kidsville News Literacy and Education Foundation. Because of this talent pool, Joy took a leap of faith and decided to produce the children’s opera, “Tom Sawyer.” It was performed on the banks of the Cape Fear River. This was an ideal location for this outstanding performance. “Tom Sawyer” was a huge success, and Cogswell's children's opera became the first and only to be performed in Cumberland County.

Joy came to Fayetteville in 1970 following her husband Bob, who got stationed at Pope Air Force Base. Like many others who arrive in our community temporarily, they found themselves enthralled with our friendliness and southern hospitality and found it hard to leave. The folks at Snyder Memorial Baptist Church had much to do with that. That church played a significant role in Joy and Bob's life. She called their Snyder family of nearly 50 years one of the most loving congregations she has ever known. And Bob is no doubt her biggest fan and advocate. In an interview with U&CW several years ago, she admits her career would not have been possible without her husband. “He has been so supportive; he even joined the choir and orchestra to see me. He has been my biggest supporter our whole marriage,” she said. “I love him dearly.” 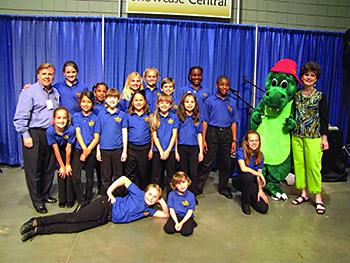 Those who knew Joy loved her dearly, and will miss her sweet and gentle spirit. However, we are all better off having had her in our lives. For me, her memory will be unforgettable, and I'll take solace in the fact that she made this a better community and world to live in. Her memory and influences will live on in the thousands of people she touched during her 50-year career and 75 years on this earth. So, move over Beethoven, and listen.

That heavenly sound you hear is our girl, Joy.