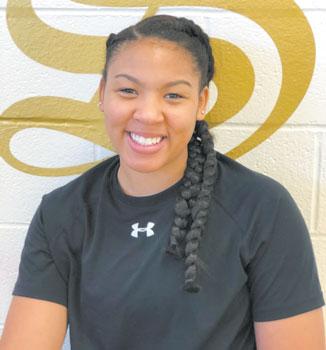 If anyone was worried about transition issues when Trinity Christian School basketball star Alex Scruggs transferred to the E.E. Smith’s girls basketball team this year, Scruggs has quickly put them to rest.

Coming out of an unexpected break in the schedule caused by the recent snow and ice, Scruggs has quickly moved to the top of the heap in the individual statistics for Cumberland County Schools’ girls basketball.

Through the most recent update of Jan. 19 at ncprepsports.net, Scruggs leads the county in both scoring and rebounding with 28.4 points and 11.3 rebounds per game.

None of this is a surprise to veteran Smith head coach Dee Hardy.

Her numbers so far this season indicate she’s met and maybe exceeded Hardy’s expectations from days gone by.

Hardy didn’t expect Scruggs to have any problems transitioning from Trinity to Smith, and she hasn’t.

“My biggest concern was just her being in the school building, the specifics of that, our guidelines, rules and regulations versus what she was accustomed to coming from a private school,’’ Hardy said.

She knew her team would quickly welcome Scruggs. “Our girls are pretty open,’’ Hardy said. “We’ve never had a difficult time with anyone transitioning into the team as well as the building. Our kids are normally the ones that meet the new kids and show them around to welcome them.’’

Scruggs said her only concern coming to Smith was that’s she’s shy by nature and was a little worried about developing on-court chemistry with her new teammates.

“I’ve been working hard to make sure I can do the best I can making the transition,’’ Scruggs said.

Her biggest surprise in moving from private school to public school play is the aggressive play, especially on defense. “It’s faster paced,’’ she said.

One thing that hasn’t changed for Scruggs is her on-court play. She thrives on driving to the basket, drawing fouls and rebounding.

Hardy agrees. “She loves to attack the basket and she’s been pretty successful with that,’’ Hardy said. As for rebounding, Hardy said Scruggs just has a knack for finding a way to be in the lane at the right place to pull them down.

At 5-foot-9 1/2-inches tall, Scruggs can be plugged in at multiple positions on the court, and Hardy has taken advantage of that.

“She’s a guard, shooting guard and power forward,’’ Hardy said. She thinks Scruggs’ college future will be on the perimeter but that she could play either guard position or a forward.

Which college she’ll be attending is something Scruggs has yet to decide. She won’t make that decision until the time comes closer, she said.

“I’m looking for a school with a family-type environment, looking for coaches to bond with,’’ she said. She’s leaning toward a major in sports medicine but hasn’t made a final decision on that either.

Whoever gets her will be getting a special talent, Hardy said.

Now that the snow break appears to be over and Smith can finally get back on the basketball court, Hardy said the goal moving forward is the same for Scruggs and the rest of the team.

“We want to keep our focus and make sure we haven’t had a brain dump on things we worked on before the days out,’’ she said. “Keeping our intensity and conditioning, that’s very key for us.’’