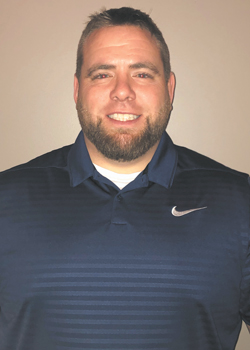 Andy Karcher has been in the Fayetteville area since 2007, moving here from Ohio. But it didn’t take him long to learn about the rich football history at E.E. Smith High School.

“It’s something that stood out to me,’’ he said, and led him to apply for the position of head football coach for the Golden Bulls. He was approved as the school’s new head coach by the Cumberland County Board of Education last week.

Karcher replaces Deron Donald, who stepped down from the head coaching position at Smith in December. In his four seasons with the Golden Bulls, Donald was 16-31.

He managed two trips to the state 3-A playoffs, including one last season. At one point under Donald, Smith suffered a 17-game losing streak, but it ended the 2019 regular season with a 43-0 win over Cumberland County rival Cape Fear. The Golden Bulls finished the 2019 season 4-8 overall and 4-4 in the Patriot Athletic Conference. That put them in a three-way tie for fourth place with Pine Forest and Gray’s Creek.

A little over a month after leaving Smith, Donald was named the new head football coach at Smithfield-Selma High School. He inherits a program there that has gone 1-10 each of the last three seasons and 8-102 for the last 10 years.

Smithfield-Selma hasn’t had a winning season in football in 12 years.

Karcher, a graduate of Wittenberg University in Springfield, Ohio, has worked as a football coach at a number of area high schools.

He spent two years at South View Middle School when he first came to the area, following that with a short stay at Cape Fear High School. From there he went to Triton High School, then returned to Cumberland County for a couple of years on the Pine Forest High School staff.He has served as an offensive coordinator and spent his years at Pine Forest coaching the offensive line.

In addition to being impressed with the history at E.E. Smith, Karcher said he found the community to be strong, along with the Golden Bull alumni association.

“The backing for the program is there,’’ he said. “They have the kids, they have the athletes, to be successful.’’

But one area where Smith is clearly lacking is raw numbers of students. According to the latest average daily membership figures provided by the North Carolina High School Athletic Association, E.E. Smith is the smallest of the 10 public senior high schools in Cumberland County that field athletic teams.

The Golden Bulls have an enrollment of 1,153 students, which makes them, along with Douglas Byrd High School, the only schools in the county with under 1,200 students enrolled.

“Obviously, the numbers do make it a little bit more interesting, a little bit more difficult,’’ Karcher said. But he is hopeful that with some success on the field, he will be able to attract as many candidates as possible to come out for the football team.

As far as offensive philosophy, he describes himself as a ball-control coach. “I’m definitely going to have a good running game in place,’’ he said. “We also have enough athletes that we’ll throw the football around and kind of spread some people out when we need to.’’

Defensively he said he prefers downhill, physical football with players that will fly around and make plays.

Karcher said he’s hopeful to be working at E.E. Smith as quickly as possible so he can began offseason workouts with his new players during the offseason skill development periods.

He said E.E. Smith principal Donell Underdue and Pine Forest principal David Culbreth are working together to make it possible for him to begin his new role at E.E. Smith before the end of the current school year.

It is too early in the process, Karcher said, to try and speculate on any changes forthcoming with his assistant coaching staff at Smith. He said he will try to determine the best course of action concerning the staff as the situation progresses.

Karcher feels the timing of his hire bodes well for giving him the maximum amount of time to work with his players during the spring offseason along with the summer to make the installation of his offensive and defensive schemes go as smoothly as possible for his team.

The last dead period of the school year before summer began Feb. 12 and ends March 3. During dead periods, all sports that are out of season are not allowed to hold so-called skill development sessions.

Karcher is hopeful that by March 3 he will be on campus at E.E. Smith and be able to begin working with his new team.

“We’ll recruit the hallways and get more guys out playing,’’ he said. “We want to hit the ground running come spring and summer ball.’’