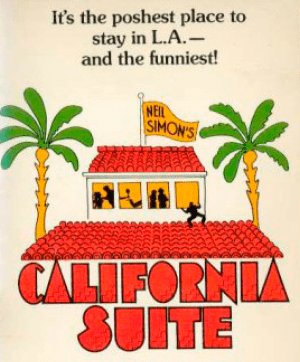 Purple Door Productions is a community theater based in Robeson County. Its goal is to enrich, educate and entertain Robeson County and the surrounding communities. For both actors and audiences, this theater is always looking for ways to engage in creating meaningful and diverse productions for children and adults. On Sept. 29-30 and Oct. 1-2, don’t miss Purple Door Productions’ showing of Neil Simon’s California Suite at the A. D. Lewis Theater at Robeson Community College in Lumberton.

Neil Simon’s play California Suite originally opened at the Ahmanson Theatre in Los Angeles in April 1976. By June of that year, the play opened on Broadway and played at the Eugene O’Neill Theatre until July of 1977.

The story takes place in Suite 203-04 at the Beverly Hills Hotel. Four totally different and unrelated stories unfold throughout the performance. The only thing they have in common is that they all take place in suite 203-04. In one story line, a mother flies in from Manhattan to pick up her daughter from the girl’s screenwriter father. The two are trying to workout living arrangements for their daughter.

Another scene features a Philadelphia businessman who wakes up in the suite next to a prostitute. His wife is on her way up to the suite as he panics to cover up his indiscretion. Next an Academy Award nominee from London, along with her newly-outted husband, struggles with what people will think when they find out her marriage is a sham. Two rich couples from Chicago stay in the suite as well. They come as friend, but things fall apart fast when one husband accuses the other of intentionally injuring his wife.

The play was made into a movie in 1978 starring Alan Alda, Michael Caine, Bill Cosby, Jane Fonda, Walter Matthau, Elaine May, Richard Pryor and Maggie Smith.

The play is produced in partnership with the Robeson Community College Foundation. The RCC Foundation provides scholarships to students who might not otherwise be able to attend RCC. The foundation offers a variety of scholarships, including funds that come with opportunities to serve throughout the community and on campus

Robeson County Community College was founded in 1965 as part of Fayetteville Technical Institute. There were six full-time employees. Three years later, it became independent and was renamed Robeson Technical Institute. It is now Robeson Community College. The school’s focus is vocational, technical, college transfer and continuing education programs. The college currently has almost 200 full-time employees and close to 300 part-time teachers.