Sometimes a Book Can Make a Difference 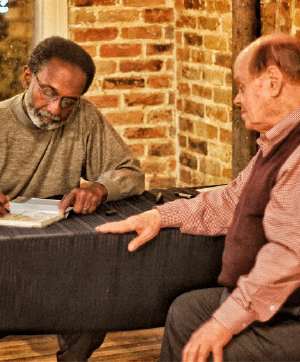 I finally had enough of hypocritical ideologies plaguing my usual social media haunts on Thanksgiving morn.

So, I did the next best thing to quench my morning reading habit. I picked up a book. Not an ebook or an on-line PDF version, but a real hardcover book with ‘smells-like-new’ pages. The title is From the Rough Side of the Mountain; Reflections of a Country Preacher. It’s a gem of a how-to-book on navigating the difficulties in life. And, there will be difficulties in life to be sure.

Local community activist Karl W. Merritt wrote the book back in 2009. It’s about his father, a small-town African-American preacher and entrepreneur. A man who clawed his way through life back when only winners got the trophy.

The book is part history and part biography, and it’s also about commitment to life and the human race. Karl wrote the book after collecting more than 14 years of audio-taped conversations with his father, the late Milton W. Merritt, Sr.

Karl admits that in his early years he did not enjoy a close father-son relationship. The elder Merritt was too busy mending the world around him.

Karl was already in the Navy when he and his father started their conversations on a deeper level. Karl is not sure how that relationship morphed into what it became. It seemed to take a new form when Karl finally out fished his father … during one of their outings on a serene lake in Albany, Ga. “It was the first day in my life where I caught more fish than Daddy. It (relationship) just caught on from there,” Karl said.

The story starts with Milton Merritt’s early life in the late 1930s of Miller County, Ga. It’s a rural county located in the southwest corner of Georgia where the Chattahoochee River forms the border with Alabama to the west. To the south is the Florida Panhandle.

It’s where he finished grade school. But Miller County back then didn’t have a high school for blacks. So, the African-American baptist congregation of Miller County created a school. Merritt enrolled in the First Flint River Missionary Baptist Association’s privately established high school. He refers to it as the ”Pink Shingle.”

He paid his way through high school by cooking in the cafeteria. He also provided the school with sweet potatoes and cured meat from his family’s farm.

It struck me: how many of our kids today would work to pay for their high school education?

Milton Merritt understood the value of education early on. The book chronicles his efforts to achieve an education and the extraordinary lengths he would go to reach his goal. The chapter in which this narrative occurs is aptly entitled, “Determined to Succeed.” That sense of determination resonates throughout book with Merritt’s mantra of “keep on keeping on.”

Merritt went on earn his bachelor’s degree in sociology with a minor in English from Savannah State College. He continued his education at Harvard and the American Baptist Theological Seminary in Nashville. He served in Europe during World War II where he broadened his view of the world. He returned home and became a teacher and, for a time, a general contractor. His lifelong endeavor to pastor in small southwest Georgia towns defines Merritt’s character. It’s where he fought for the rights of his people during the tumultuous civil rights era of the 1960s. It’s a fight that, according to Karl, cost him both financially and socially.

But the book is more than about a black man fighting injustices in the deep South. It’s about perseverance in the face of obstacles that life throws at you. And, more importantly, how to handle them. It’s about a time when no one ever heard of safe spaces or political correctness. You just dealt with your problems.

In the last chapter, entitled “Counting the Cost,” Karl outlines his father’s sacrifices. The first among them is that family members will suffer. The second is that a lot of people will not join an effort that requires even little risk or sacrifice. Karl lists six more truisms that afflict those who want to make things better. They all hit home, especially now.

This book has value. It’s a good read and will leave you with a greater perspective of life. It’s a refreshing departure from the self-serving, post-election whining you find on FaceBook or Twitter. It’s an escape from the hundreds of blogs written by unchecked malaperts on both sides of the issues.

Contact Karl on at KarlMerritt.com and find out how to get your hands on this book. your kids. Its contents contain a valuable lesson.