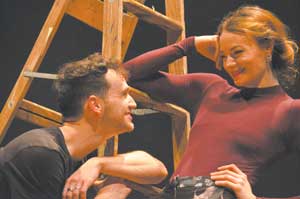 The Cape Fear Regional Theatre brings to the stage a new adaptation of the Jane Austen classic “Sense & Sensibility” April 12-29. This Kate Hamill adaptation is billed as a playful new version of the story of the Dashwood sisters – sensible Elinor and hypersensitive Marianne – after their father’s death leaves them without financial means to maintain their social status. Set in a late 18th century English society where status and money govern the rules of love, this could be a challenge for the Dashwood sisters, and very entertaining for the audience.

Hamill’s intent in adapting the classic was to create dynamic female characters. The basic story remains the same. “It honors the pining and repression and missed connections of what Austen wrote,” said Mary Kate Burke, the CFRT artistic director. Burke is also directing this production, her first since she came to CFRT last year. “If you love Austen, you will still love this adaptation,” she said. “It is faithful to Austen but doesn’t get stuck in the world of doilies.”

Burke admits that her version is influenced by her own coming-of-age watching John Hughes movies in the 1980s. So, audiences can expect it to reflect “the energy people put into a burgeoning romance,” she said. “The fun of the story is how zany it is.”

Austen loyalists should not be worried – think of it as a movie musical with a fresh approach to style, music and movement onstage. But don’t expect legwarmers and neon T-shirts. “It is a wonderful snow globe of the mirth and the awkward festivities of falling in love,” she said.

Burke has assembled an ensemble cast and crew with CFRT regulars and a few newcomers. With a cast of 10, most actors will portray more than one character. Robin Galloway, Kelsey Milbourn and Mary Lynn Bain play the Dashwood sisters Elinor, Marianne and Margaret. All three are making their CFRT stage debut.

Milbourn (Marianne) is an actress, choreographer and adjunct faculty in the theater program at Texas Christian University. She is also the choreographer for “Sense & Sensibility.”

Galloway (Elinor) is a New York City-based actress with several stage and network television appearances. She is also currently working at CFRT in military outreach, coordinating theater programs such as upcoming workshops at community centers on Fort Bragg.

Bain is a recent graduate of William Peace University whose credits include shows for Theatre Raleigh and Raleigh Little Theater.

Diana Cameron McQueen will play Fanny Dashwood and Lucy Steele– both are characters that cause trouble for the Dashwood sisters.

No stranger to the CFRT stage, Libby McNeill Seymour will play Mrs. Dashwood and Mrs. Ferrars. She last appeared at CFRT in “Arsenic and Old Lace.”

Greg King, a regular at CFRT, will play four roles – Sir John Middleton, Thomas, a doctor and a servant. King was last seen at CFRT in “Wait Until Dark.”

The show is appropriate for younger audiences Burke said. CFRT has special events lined up for the production as well. April 12, audiences can join a birthday bash for CFRT’s founding artistic director Bo Thorp. “Sensible” cocktails will be served. April 15, there will be an Austen Talk & Tea with a pre-show conversation about all things Austen while enjoying an afternoon tea. Military Appreciation Night is April 18.

For more information about the show or special events, contact the box office at (910) 323-4233 or visit www.cfrt.org