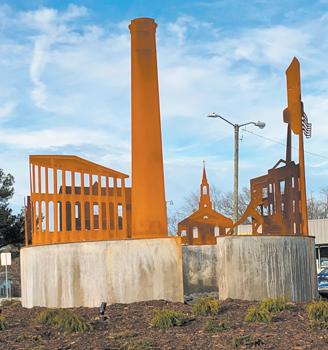 Editor’s Note: Up & Coming Weekly Senior Staff Writer Earl Vaughan Jr. is a native of Massey Hill. He spent the early years of his life on Princeton Street off Southern Avenue next to Massey Hill Baptist Church. Had his father not entered the ministry and moved away from Fayetteville in the early 1960s, Earl likely would have been in the final graduating class of Massey Hill High School in 1972.

Organizers of the Massey Hill Heritage Discovery Project, along with current and former residents of the area, gathered to see an artistic tribute to the community dedicated at the nearby roundabout on Cumberland and Camden Roads.

It might take a few trips around the structure to see all the elements involved. Each element is designed to tell the story of Massey Hill and its history as a community built around the long-departed textile industry.

The project started about three years ago. Representatives of the Arts Council of Fayetteville/ Cumberland County first reached out to former Fayetteville mayor and Massey Hill resident Tony Chavonne about the possibility of putting some artwork  in the roundabout once it had been completed.

“Tony got real excited at the thought we could actually have some control over what was going into the roundabout, rather than just a piece of art,’’ said John Jones, another product of Massey Hill and former co-worker with Chavonne at The Fayetteville Observer.

Chavonne and Jones first met at the Massey Hill drugstore to talk about possibilities for the artwork.

“It snowballed from there,’’ Jones said. “We developed a group to see if we could get some community input.’’

One decision was made early, Jones said. The artwork was going to be something recognizable — something people in the community could look at and remember the community they once knew.

Jones was blunt about what he was looking for. “I didn’t want to be involved in this and (then) when it was all said and done, as I’m riding down Southern Avenue with one of my friends, we look over and say, ‘What the heck is that?’” he said. “If we’re going to do this, it’s got to speak to Massey Hill. It’s got to speak to the community.’’

The group met with a number of artists before settling on Michael Waller and Leah Foushee-Waller of Hillsborough.

Waller was previously best known for creating a two-ton metal sculpture of a bull for the city of Durham, North Carolina.

Jones said the Massey Hill committee conveyed to Waller and his wife that they weren’t looking for something abstract; they wanted something that would tell a story.

The committee held a community meeting in the gymnasium at Massey Hill High School so people could share ideas and bring pictures and artifacts for Waller and his wife to see.

Then Waller toured the area, from the mills at Tolar Hart, Lakedale and Puritan to Massey Hill High School and other local landmarks.

“You could see his mind working,’’ Jones said. “He was taking snapshots that automatically trigger your memory of Massey Hill.’’

That process led to the decision of what things would be rendered in Waller’s metal sculpture at the roundabout: The smokestack. The schoolhouse. The old mill village. The water tower. The church. A football player.

Off to the side, on an adjacent property, is a sign paying tribute to the sculpture and the many people who made it happen. Beneath the sign are just more than 300 bricks, paid for by various people, each paying tribute to a friend or relative.

West made the morning announcements daily, and at the end of these announcements, he would instruct students who needed a little extra attention for various transgressions to “see me” in the office.

“He called a few weeks ago and we were talking about what to put on his brick,’’ Jones said. “He said, ‘Just put See Me West.’ People died when they saw that.’’

Jones said he’s been involved with a lot of fundraisers over the years, but he can’t remember one that was more fulfilling than this one.

When the sculpture was finished, a man walked up and asked Jones how much of his tax money went into it. Jones replied, “That didn’t cost you a dime. It came out the peoples’ pockets because they wanted to do it.’’

The whole project was a cooperative effort of the local committee, the Arts Council and the Cumberland Community Foundation, Jones said.

There is an unfinished look to the work, with its bare metal and unfinished edges, but Jones said that’s intentional.

Someone asked what color they were going to paint it, and Jones replied it wouldn’t be painted.

“This is the way it’s going to look,’’ he said. “Somebody joked, this isn’t Haymount Hill. It’s Massey Hill. We’re not going to polish it up.