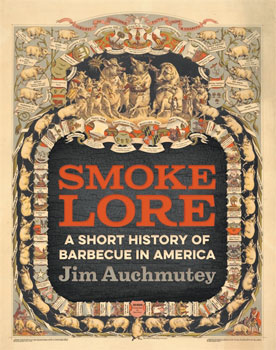 “You shouldn’t be so worried about the transition in the barbecue world.”

Jim Auchmutey was trying to reassure John Shelton Reed and me about our loss of old-time barbecue restaurants, including Wilber’s in Goldsboro and Allen & Son in Chapel Hill.

Auchmutey wrote for The Atlanta Journal-Constitution for almost 30 years, specializing in stories about the South and its history and culture. His new book, “Smokelore: A Short History of Barbecue in America,” is a must-read for barbecue fans and social history students. Retired UNC-Chapel Hill professor Reed is one of North Carolina’s barbecue gurus and co-author of “Holy Smoke: The Big Book of North Carolina Barbecue.”

Auchmutey understands how we are grieving the loss of our barbecue icons, but he urged us to consider some positive developments. “Young people who have been on the barbecue contest circuit have learned the science of heating and cooking meats. They are better than some of the old masters, and they are opening up restaurants where the barbecue is more consistently good than some of the old masters.”

He pointed out that the young restaurant owners are expanding their menus. And not just with ribs and beef briquettes. They are experimenting with wood-fired dishes from all over the world, adding opportunities for expanding the palate.
Reed and I conceded that there are some fine new restaurants, such as Picnic in Durham, where young owners have delivered outstanding results, thanks to careful sourcing of the meats and consistent cooking methods.

But, we told Auchmutey, there is a problem. The new places have to charge higher prices to cover the increased rent, new cooking equipment, loan payments and compliance with new construction and environmental requirements.

Higher prices and fancier menus mean we do not get the same mix of construction workers, white collar people, students and folks of modest means. Reed held out Stamey’s in Greensboro as the ideal, where a simple barbecue sandwich with fixings can be within the lunch budget of almost everybody who works for a living.

These newer places, Reed said, don’t give us a place where people from all walks of life can come together for a good meal at a modest price.

Something like what is happening to barbecue restaurants here in North Carolina is happening to other diners across the country according to a story by Steven Kurutz in The New York Times last month.
Kurutz describes the Oakhurst Diner in Millerton, New York, as “a living time capsule.”

“Housed in the original 1950s Silk City dining car, it screams classic diner: crimped stainless-steel facade, Formica counter with stools, pink-and-blue neon sign, specials scrawled on chalkboards.”
“But,” he writes, “the nods to midcentury nostalgia mostly end there.”
He explains that the menu includes a bowl of seaweed and brown rice, kimchi, and a hamburger made from “grass-fed and grass-finished” beef. That fancy hamburger costs $16.

It is the “same look and vibe as the classic steel original, but the food has been upgraded to reflect current tastes.”

“And,” mourns Kurutz, “So was born the greasy spoon serving avocado toast and deconstructed chicken potpie.”

Kurutz introduces and quotes Richard J.S. Gutman, author of “American Diner Then and Now,” who explains the current appeal of the old diners. “You feel at home in the diner whether you’ve been there dozens of times or it’s your first time. There’s a buzz inside. There’s a kind of energy when you’re sitting stool to stool, cheek by jowl, asking for the ketchup. That feeling, that place you’d go with your grandpa or your auntie, where is that anymore? There’s something so democratic about diners. They’re part of the community. I think that’s what people are craving.”

It is also what Reed and I are craving and what we are missing as our old-time barbecue places bite the dust.