How to foster a love of music in children 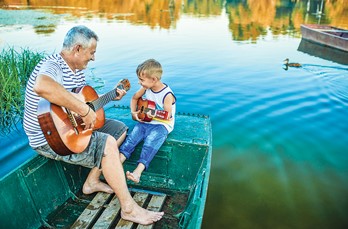 Music enriches people's lives in myriad ways. Age is of no consideration when it comes to benefitting from and appreciating music, but it seems that young people in particular have a lot to gain from music education.

According to the New England Board of Higher Education, various studies have found that consistent music education can improve vocabulary and reading comprehension skills.

In addition, the National Association for Music Education says that research has found a significant relationship between arts participation at school and academic success.

Parents who want their children to reap the benefits of being involved with music can try the following strategies aimed at fostering a love of music in young people.

Turn the television off and turn music on. Exposing youngsters to music is one of the simplest and most effective ways to get them to embrace it.

For example, in lieu of turning on the television while preparing meals, parents can play music instead.

Let youngsters pick their own songs, or mix it up by including some of mom and dad's favorites as well. Such exposure can be incredibly valuable for youngsters. In fact, a 2016 study from researchers at the University of Southern California found that musical experiences in childhood accelerate brain development. Music is especially effective at helping children in language acquisition and reading.

Another way to build kids' enthusiasm for music is to replay some of their favorite songs. While mom and dad may cringe at the prospect of hearing "Baby Shark" several times in a row, they should take note of how enthusiastic their kids become when hearing a favorite song. That enthusiasm can benefit their language skills as they listen closely to the lyrics in an effort to memorize the words. Youngsters may not be so receptive if they don't like what they're hearing.

Dance to music. Kids are bundles of energy, and dancing is a fun way for them to expend some of that energy. Dancing also provides a great reason to play music. Physical activity set to music can help kids burn off some extra energy as they develop their brains, making dance sessions a win-win for both parents and children.

Embrace opportunities to see live music. Kids are often captivated by seeing musicians perform in person. When possible, take youngsters to concerts, local music festivals and/or restaurants that showcase local musicians. Such excursions may prompt youngsters to want to learn how to play, which can provide a host of additional benefits, even for especially young children.

In fact, a 1996 study published in Nature found that first grade students who took part in music classes during art study programs experienced marked improvement in reading and math proficiency.

Music enriches people's lives in various ways, and exposure to music at a young age can be especially valuable to children.