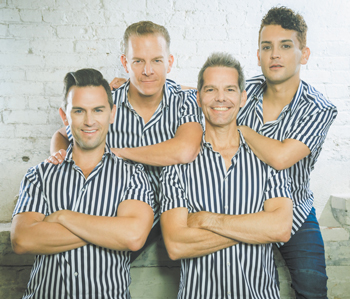 Closing the curtain on the 2018-19 season, Givens Performing Arts Center brings The Midtown Men to the stage April 15 as part of its Professional Artist Series.

The Midtown Men brings together stars from the original cast of “Jersey Boys.” It is the first vocal group formed by the principal cast of a high-profile Broadway show. The group, made up of Tony Award winner Christian Hoff, Michael Longoria, Daniel Reichard and Tony Award nominee J. Robert Spencer, pulls out all the stops, bringing onstage chemistry and heartpumping 1960s classics to the stage.

While “Jersey Boys” is a play that tells the story of Frankie Valli and the Four Seasons, The Midtown Men is a concert that showcases the most popular hits of an entire decade, celebrating genres from Motown to rock ’n’ roll, beach music, pop, rhythm and blues, country music and more.

The 1960s was a time of great change and upheaval, and it is reflected in the music of that decade, as are traditional musical themes like coming of age and unrequited love.

“There is so much diversity in the 1960s music,” said band member and Tony award winner Hoff. “If you look at the groundbreaking things that happened in the 1960s, there was so much going on in the world — and it was reflected in the arts, including music.” The world has changed a lot since the ’60s, but Hoff noted that it is a decade that still has a lot to offer, especially in today’s fast-paced, high-tech world. And that is where The Midtown Men come in.

“We bring a relevance to today’s digital culture, using live analog music,” said Hoff. “As much as (the show) is a celebration of the past, it is also a celebration of the future. That is what brings audiences of all ages together. We have generations of families that come together to see our shows.”

The Midtown Men is being held in conjunction with the Act I Diner’s Club. Themed meals will be available for an extra charge, and will be served in the Chancellor’s Dining Room before performances in GPAC. Call the GPAC box office at 910-521-6361 for information.