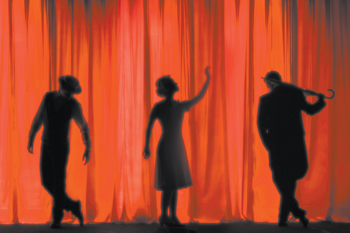 With local theaters and performing arts groups rolling out their season schedules, there are plenty of top-notch performances from which to choose.

The Fayetteville Dinner Theatre, Gates Four Golf and Country Club and Sweet Tea Shakespeare present “HamLIT,” Sept. 27-28. Imagine, if you will, the writers, director and actors of Shakespeare’s beloved “Hamlet” know the story they want to tell, but they get lost at a fraternity party on their way to the show. Each performance includes a full-service cash bar and wine tasting, duel entrée dinner with two sides. For more information, call 910-391-3859.

This season, Cape Fear Regional Theatre offers another great lineup, starting with “Mamma Mia!” The play tells the story of young Sophie, who, seeking to find her father,  invites three men from her mother’s past to her wedding. It runs Sept. 12- Oct. 9.

“No Child” is next in the lineup with a look into the way teachers change lives and build community. Anyone who has taught, attended or has loved ones who attend public school will love it. “No Child” runs Oct. 31-Nov. 17.

Shrek the ogre and his sassy sidekick Donkey take the stage Jan.23-Feb. 16 as the pair set out to rescue an unconventional princess. A show for kids and adults alike, if you liked the movie, CFRT promises you will love the musical. “Shrek” runs Jan. 23-Feb. 16.

“Murder for Two,” is not only a mystery. It’s a barrel of laughs. With one actor playing the investigator and the other playing all 13 suspects — and both playing the piano — this musical comedy/whodunit will have you dying of laughter. It’s onstage March 5-22.

Next up, April 9-26, “The Curious Incident of the Dog in the Night-Time” goes straight for your heartstrings. Mrs. Shear’s dog is dead and 15-year-old Christopher is determined to find out what happened.

The season closes with “Jelly’s Last Jam,” May 14-31. Join jazz pioneer Jelly Morton as he gets a second chance at life. The audience will follow Jelly from the steamy back alleys of New Orleans to the brightly lit stages of New York as he makes good for past mistakes.

The Gilbert Theater is a semi-professional community-minded theater company and conservatory with a mission to “ … produce creative, innovative plays and events to stir audiences and students of its conservatory to explore and contemplate the human condition through the talents of local and guest artists.”

“It’s a Wonderful Life” has become a holiday tradition at the Gilbert, and this year does not disappoint. It opens Nov. 22 and runs through Dec. 15.

“Ruins,” a comedy/drama by Montgomery Sutton, is up next onstage from Jan. 24-Feb. 9.

Get ready for some of the classics with “The Complete Works of William Shakespeare — Abridged” March 20-April 5.

Find out more about Gilbert Theater at gilberttheater.com.

Givens Performing Arts Center in Pembroke has a reputation as a top-notch venue for entertainment. Season ticket holders are invited to upgrade their ticket status and join the Act 1 Diner’s Club. The Diner’s Club includes dinner before specific performances, for just $35. The dinners are served in the Chancellor’s Dining room in the James B. Chavis Center. Learn more about Act 1 at https://www.uncp.edu/resources/gpac/act-1-diners-club.

With five Grammy Awards and an induction into the Gospel Music Hall of Fame, The Blind Boys of Alabama have been in the music business for more than 70 years. From traditional gospel music to spiritual works by songwriters like Eric Clapton, Prince and Tom Waits, the group has appeared on recordings with many artists, including Lou Reed, Peter Gabriel, Bonnie Raitt, Willie Nelson, Aaron Neville, Susan Tedeschi, Ben Harper, Patty Griffin and more. They will be onstage at GPAC Sept. 12.

Josh Knott’s and Lea return to the stage with new acts for “Extreme Illusions and Escapes,” Sept. 20. The pair have won the 2016 Merlin Award and the 2016 Fair Award for achieving the highest level in their craft on both national and international stages. Inspired by  Las Vegas-style shows, this performance is fast-paced and includes a variety of stunts — and plenty of audience participation.

“Noises Off!” is a comedy by Michael Flynn that has received rave reviews. It’s opening night of the play “Nothing On,” and things couldn’t be worse. Full of glorious surprises and delicious comedy — and the audience gets to see the pandemonium unfold backstage. “Noises Off!” is scheduled for Nov. 14-15.”

Nov. 24, celebrate the holidays with “The Nutcracker,” presented by Dance Alive National Ballet, complete with beautiful costumes and sets and incredibly talented dancers for the Christmas season.

The New York Times describes the show as “both a peppy celebration of can-do spirit and a more somber exploration of what American servicemen experienced when they marched home from World War II. It’s a great argument for why theater can sometimes tell a story more boldly and more viscerally.”

GPAC hosts the Siberian State Symphony Orchestra Feb. 18. Founded in 1977, the orchestra quickly won a reputation as one of the best orchestras from Russia. The orchestra plays with the finest Russian soloists and plays the great Russian classics.

Winning a 2016 Tony Award for Best Musical Revival, “The Color Purple” is a classic story about love and triumph in the American South in the early 1900s. It will be onstage at GPAC March 2. The music includes jazz, gospel, ragtime and blues.

The GPAC season closes April 28 with “An American in Paris.” Bringing romance and adventure to the stage, this production tells the story of life in postwar Paris as World War II veteran chooses to make a name for himself as a painter in Paris. Then he meets Lise, a young Parisian woman who complicates his life greatly.

Find out more about GPAC and all it has to offer at https://www.uncp.edu/resources/gpac/professional-artist-series.

Fayetteville’s favorite roaming theater troupe has a busy season ahead.

“HamLIT” brings comedy and hijinx to the Arts Council of Fayetteville/Cumberland  County Oct. 4 and runs until Nov. 1. The show plays at Dirtbag Ales in Hope Mills Oct. 10 before moving on to venues in Sanford, Fuquay-Varina and Benson. Come ready to laugh.

STS celebrates the holidays with “Behold,” a Christmas concert featuring familiar gospel tunes. The show focuses on Mary’s story. It’s a stirring and heartfelt show, sure to put you in the holiday spirit. It runs Dec. 4-14.

Jan. 2-15 STS tells a tale of ambition and evil, featuring a king, witches, murder plots and more as “Macbeth” comes to Fayetteville before heading to Raleigh Jan. 23-26.

Lovers, mischievous fairies and well-intentioned actors come together in the comedy “A Midsummer Night’s Dream.” It plays April 23-26 at Fayetteville State University and April 30-May 3 at the Poe House at the Museum of the Cape Fear Historical Complex.

Find out more about the Sweet Tea Shakespeare season at http://www.sweetteashakespeare.com.