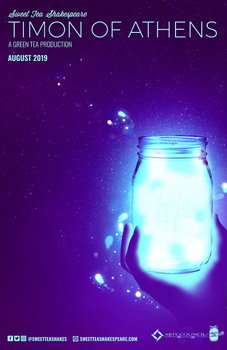 “Timon of Athens” is the story of the too-generous Athenian nobleman Timon. Timon shares his wealth liberally with his “friends,” hosting lavish parties and lending financial support to their many endeavors. Apemantus warns Timonthat his friends are taking advantage of his generosity, but Timon refuses to heed the warnings, saying, “O, that men’s ears should be / To counsel deaf, but not to flattery!”

He’s further warned by Flavius, his servant, that his wealth is dwindling. But again, Timon ignores the warnings, preferring to give money rather than his time, binding his friends to him with his generosity.

Eventually, Timon finds himself destitute and without friends to lend him their support. He leaves Athens to live in a cave. While scavenging for roots, he discovers a cache of gold, which he squanders on ill-conceived plots to ruin Athens — and the friends who betrayed him.

The play was performed by Sweet Tea’s youth company, “Green Tea.” Green Tea is a yearlong program designed to introduce 12- to 17-year-old students to the technical elements of acting and the intricacies of Shakespearean language. It culminates in a full performance.

Sweet Tea Shakespeare Theater is known for its minimalist approach to Shakespeare productions. The group limits the use of sets, props and costumes, preferring instead to focus on the storytelling element of the production. The shows also include live music and often original songs. And unless there’s inclement weather, they perform outdoors, providing refreshments to their guests and creating the same atmosphere in which Shakespeare’s plays were originally enjoyed.

“Timon of Athens” was performed at the historic Moulder-Warner House, owned by Hope Mills Mayor Jackie Warner, who is one of the founding members of the Hope Mills Creative Art Council. The house is on a spacious corner lot just off Main Street. It’s traditional white columns, hydrangeas and magnolia trees lend themselves to its idyllic charm. The members of Sweet Tea Shakespeare Theater and the Hope Mills Creative Art Council were pleased with the night’s success and are looking forward to many more joint ventures. They have a production tentatively scheduled for March 2020 and another scheduled for June.

Behold follows in the lineup Dec. 5-7 and 12- 14 at Holy Trinity Episcopal Church and Wednesday, Dec. 4, at Methodist University.