Take a chance on ‘Mamma Mia!’ 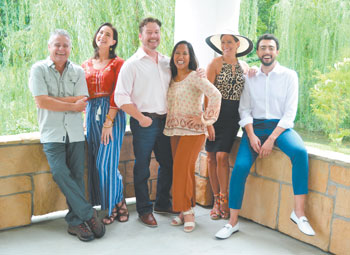 There is a party happening here in Fayetteville that you do not want to miss! Rising to the challenge yet again, Cape Fear Regional Theater, under the auspices of Artistic Director Mary Kate Burke, kicked off the 2019-2020 theater season with “Mamma Mia!” easily rivaling last year’s “Music City” opener.

Among the night’s outstanding performances were those turned in by Scenic Designer Sarah Harris and Scenic Artist David Rawlins, who managed to make an entire Greek island resort, including the surrounding sea, come breathtakingly alive. The movie version’s soundstage didn’t do it any better. And the movie version didn’t offer theatergoers an onstage bar, which really got the party going.

With music and lyrics by Bjorn Ulvaeus, Benny Andersson and Stig Anderson and a book by Catherine Johnson, credit the able direction of Suzanne Agins, along with the choreography of Ryan Migge, and the sterling performance of Zeek Smith and his orchestra for keeping the show fast-paced, lively and fun. Along with the accessible bar, using the theater’s aisles to help stage several dance numbers further engaged the audience as active party participants. And those ABBA songs never grow old, some of them being a party unto themselves.

“Mamma Mia!” tells the story of Sophie, a 20-year-old who invites three men from her mother’s past to her wedding with the hope of discovering which one of them is her father. Alexa Cepeda, making her CFRT debut, played Sophie, and hers was consistently the strongest voice of the evening. In addition to her vocal talent, she infused her character with sparkling charm.

Joanne Javien played Donna, Sophie’s mother, with the dramatic passion one would expect from the lead of Donna and the Dynamos, her throw-back 70s trio. Her rendition of “The Winner Takes It All” was superb. Heather Setzler played Tanya, the seductive member of the trio, and had fun with her “Does Your Mother Know” number. Nicki Hart played Rosie, the third Dynamo, and managed to be funny, sexy and a little bit vulnerable as she propositioned Bill, one of Donna’s former lovers, to “Take a Chance on Me.”

The entire production consistently drew cheers and thunderous applause, and the finale had the entire theater audience up and dancing in their seats.

“Mamma Mia!” runs through Oct. 6 with both evening and matinee performances scheduled. Also, there will be bonus preshow features such as Greek Night, 70s Nights and discounts for Military and Teacher Appreciation Nights. For bonus and discount details, as well as a schedule of performance times, dates and ticket prices, visit www.cfrt.org.